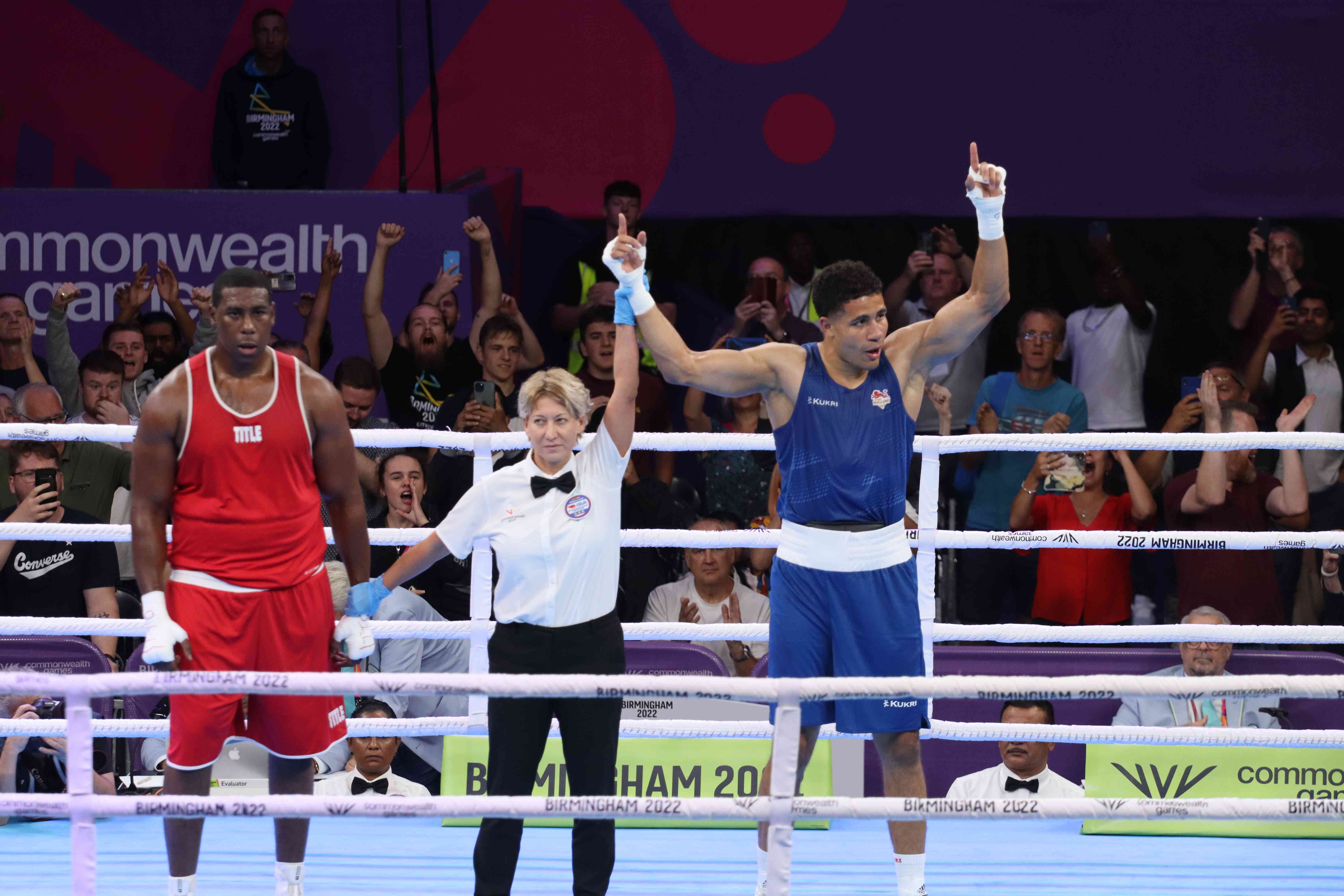 SIXTEEN members of the GB Boxing squad have now guaranteed medals at the Commonwealth Games following the completion of today’s quarter-finals.

The only disappointment on yet another memorable day at the NEC Arena came as both Sameenah Toussaint and Harris Akbar suffered defeats, missing out on a podium finish.

Gemma Richardson made it a 21st birthday to remember when she comfortably and confidently eased her way to the lightweight semi-final.

The Scunthorpe boxer guaranteed her medal following a unanimous points victory over Jade Burden of the Isle of Man and must now beat India’s Jaismine Jaismine for the chance to box for gold.

Richardson said: “There’s not a better present you can have. Not many people have got a Commonwealth medal on their 21st birthday, which makes it even more special than it already is.

“The game plan going in there was always going to be similar to my last performance. Stick to my strengths, use my feet and my boxing brain and try to get the win that way and I’m lucky enough that I executed it well.

“It’s going to be a gold medal celebration. There’s still business to be done, the birthday celebrations are going to have to wait.

“I love fighting in front of this crowd. Every day they keep performing. It’s so close to the feeling of the Olympics.

“The atmosphere never dies down in the ring and it gives you that little push.”

“We had a training camp in Ireland, and I sparred her [Jaismine] but we will make a game plan with the coaches and worry about that on Saturday.

“You’ve got to be confident, I’m not here for a bronze, I’m here to get better. If I perform, I can beat anyone on my day.”

Up next in his second bout of the competition, Ioan Croft became the third Welsh boxer to reach the semi-final stages, following wins for Rosie Eccles and Taylor Bevan yesterday, when he stopped Zakeyu Mbewe of Malawi in the second round of their welterweight quarter-final.

The 20-year-old will be up against the newest member of the GB Boxing podium squad, Tyler Jolly in the semi-final.

Ioan Croft said: “I stuck to the game plan really. I sussed him out and it was nice to get him out of there in the second round.

“The next fight won’t be an easy one. I’ll have to come with my A-game and it will be a tough few rounds but I’m definitely confident.”

Scotland’s Jolly set up his semi-final tie with Croft when he got the better of Papua New Guinea’s Neville Warupi via unanimous points decision in a tricky affair.

“I made it tough for myself. First round I won easy, but I got excited and jumped into a cracking right hand. I touched the ground, laughed it off and got back to business.

“It’s boxing. Everyone gets knocked down but it’s about how you get up – I know that’s a bit of a cliché!”

Garan Croft ensured both him and his brother will stand on the podium come the end of the games when he recovered from losing the first round to beat two-time Olympian Mauritius’ Mervin Clair via unanimous points decision.

His win sets up a light-middleweight clash with Aidan Walsh.

Garan Croft said: “That was tough. I was 4:1 down after the first round. Personally, I thought I was ahead going back to the corner but I got back to the corner and I was told to start putting some punches together and find him with my right hand and I managed to do that in the second.

“I upped the work rate in the last round because I knew he was going to come for me but I pushed through and did what I needed to do.”

In the final action of the afternoon, Lewis Williams wasted no time in securing his Commonwealth Games medal after he stopped Arthur Lavalou of Papau New Guinea inside the first round.

It means the heavyweight has earned his second medal of the year following his bronze at the European championships and will look to change the colour against Australia’s Edgardo Coumi.

Williams said: “It’s nice to get the work done early. It just keeps you away from the stuff you’ve got to avoid in tournament boxing, cuts, and bruises. Against a smaller fighter, there’s always head collisions for myself.

“I want to change the colour of the medal. I’m pleased to have one already but I’m not at the same time.

“The home crowd can definitely give me the edge to get gold. It’s a right motivator walking out in front of that crowd with people cheering you on, it’s quality.”

Moving into the evening session and Wales’ Jake Dodd earned his second stoppage victory in as many bouts after he ended his contest with Northern Ireland’s Clepson Paiva late in the third round.

With a medal secured, the 27-year-old will face fellow GB flyweight Kiaran MacDonald in the semi-final.

“In the third round I needed to have 100% in there, which I do always give, but I left my heart and soul in the ring because of how bad I wanted a medal.”

MacDonald earned his place in the England vs Wales clash with Dodd following a dominant unanimous victory versus Botswana’s Raja Mahommed in his second bout of the Commonwealth Games.

MacDonald said: “I felt like I was in control from the off. I let him have the front foot but that was the game plan to let him fall onto my shots.

“I had to stay calm when he tried to overwhelm me. I’m experienced now, I’ve seen all the styles,

“I have just got to concentrate on what I have got to do and not get overwhelmed by both the occasion and the fight itself. I stayed cool and got the job done.

“I’m over the moon. Another medal for my summer but this time I want to turn it into gold after the European silver.

“I was absolutely devastated with that, so I don’t want to let this one slip through my fingers.”

After waiting a week to make his debut at the Commonwealth Games, Delicious Orie did not disappoint when he stepped into the ring.

The super-heavyweight put in a memorable performance against the 2021 world bronze medallist, Nigel Paul of Trinidad and Tobago, to earn a unanimous points victory.

The 24-year-old will look for a similar performance against New Zealand’s Luila Mau’u in the semi-final.

Orie said: “I couldn’t believe the atmosphere. I’ve been here for the past week watching the other guys but I could never have expected this kind of crowd today. I want to thank everyone for being there for me and shouting out my name.”

“He was no pushover. He’s a very experienced campaigner, he’s boxed Frazer [Clarke], Joe Joyce, he’s been around, he knows what he’s doing. But I believed in myself and my skill. I couldn’t be in a better place, sparring with the likes of Frazer Clarke and Anthony Joshua.

“I’m eyeing up that gold medal, I want to take it one step at a time. Every opponent is dangerous, especially in the super-heavyweight game. All it takes is one punch and I’m aware of that. I take every fight one step at a time. But you will see me there in the final, I believe that.

“I’m not going to sleep tonight, I’ll be shadow boxing in my hotel room. I can’t wait to go back out there in a couple of days.”

Reigning European champion Harris Akbar was also in action but was on the wrong side of a narrow 3:2 split against Tokyo 2020 bronze and 2018 Commonwealth Games silver medallist Aidan Walsh of Northern Ireland to just miss out on the medal stages.

It was the same scenario for Sameenah Toussaint who also suffered defeat in her quarter-final to Australia’s Tina Rahimi.

With a rest day scheduled for tomorrow (Friday 5th August), boxing action will resume for the semi-final stages on Saturday 6thAugust where XX GB Boxers will compete for a chance to box for gold.

England’s Demie-Jade Resztan gets proceedings underway in the minimumweight division against Botswana’s Lethabo Modukanele at 10.45.

Shortly after, in the first of four semi-finals which will see GB Boxers compete against each other for a place in the final, Wales’ Jake Dodd faces England’s Kiaran MacDonald at 11.15.

At 11.45, Rosie Eccles will be hoping to reach her second Commonwealth Games final when the 2018 silver medallist takes on Northern Ireland’s Eirann Nugent.

In the second all-GB Boxing affair and a repeat of the European championships semi-final, Scotland’s Sam Hickey and England’s Lewis Richardson go head-to-head in middleweight action at 12.00.

Closing the day’s first of three sessions at 12.45 in yet another bout that involves two members of the podium squad, this time as Aaron Bowen and Taylor Bevan clash for a place in the light-heavyweight semi-final.

Savannah Stubley and Gemma Richardson faces off against Indian duo Zareen Nikhat and Jaismine Jaismine at 14.45 and 15.30 before Scotland’s Reese Lynch challenges Canada’s Wyatt Sanford at 16.00.

In the fourth and final all GB clash, Ioan Croft of Wales and Tyler Jolly of Scotland meet in the welterweight division at 20.00 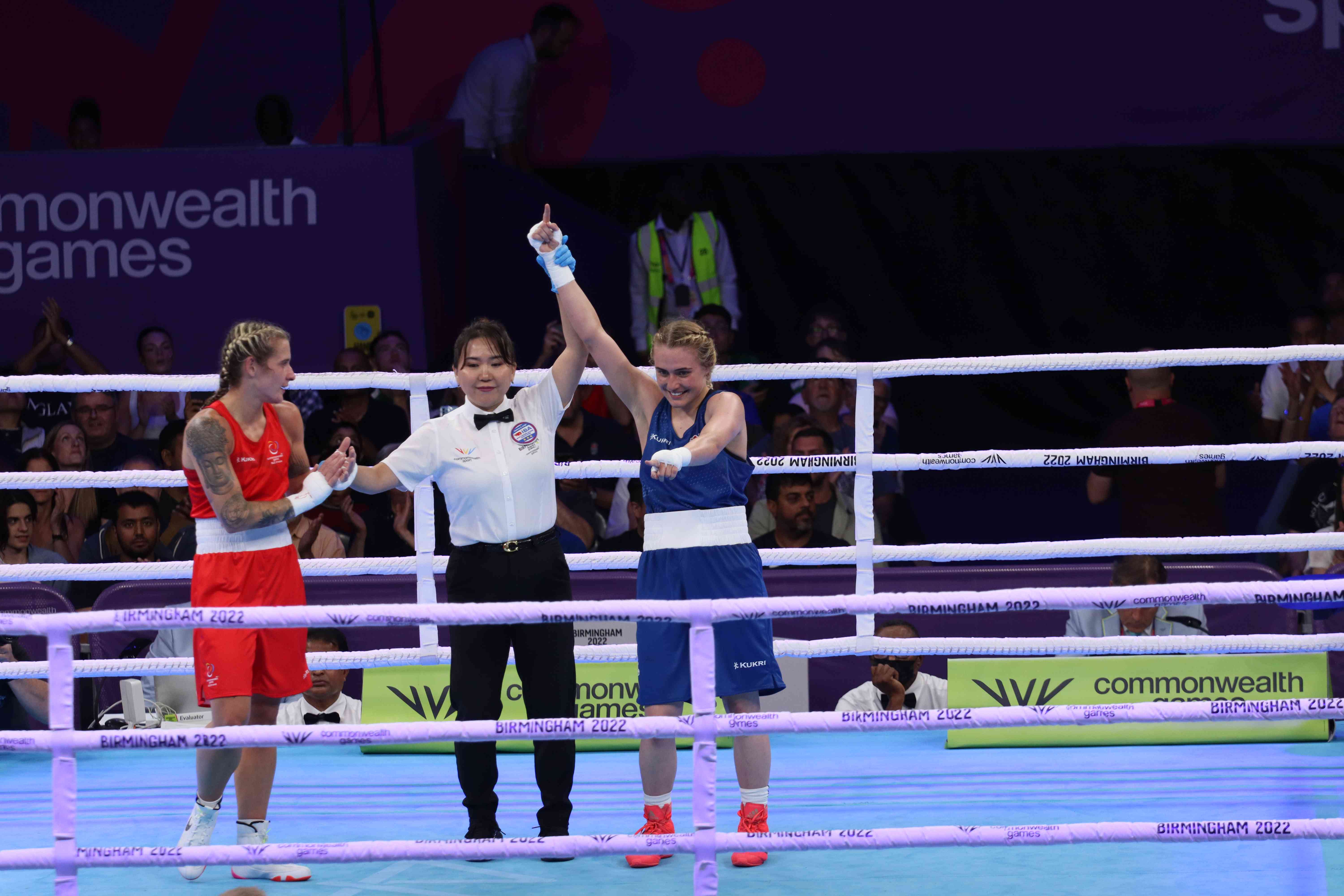 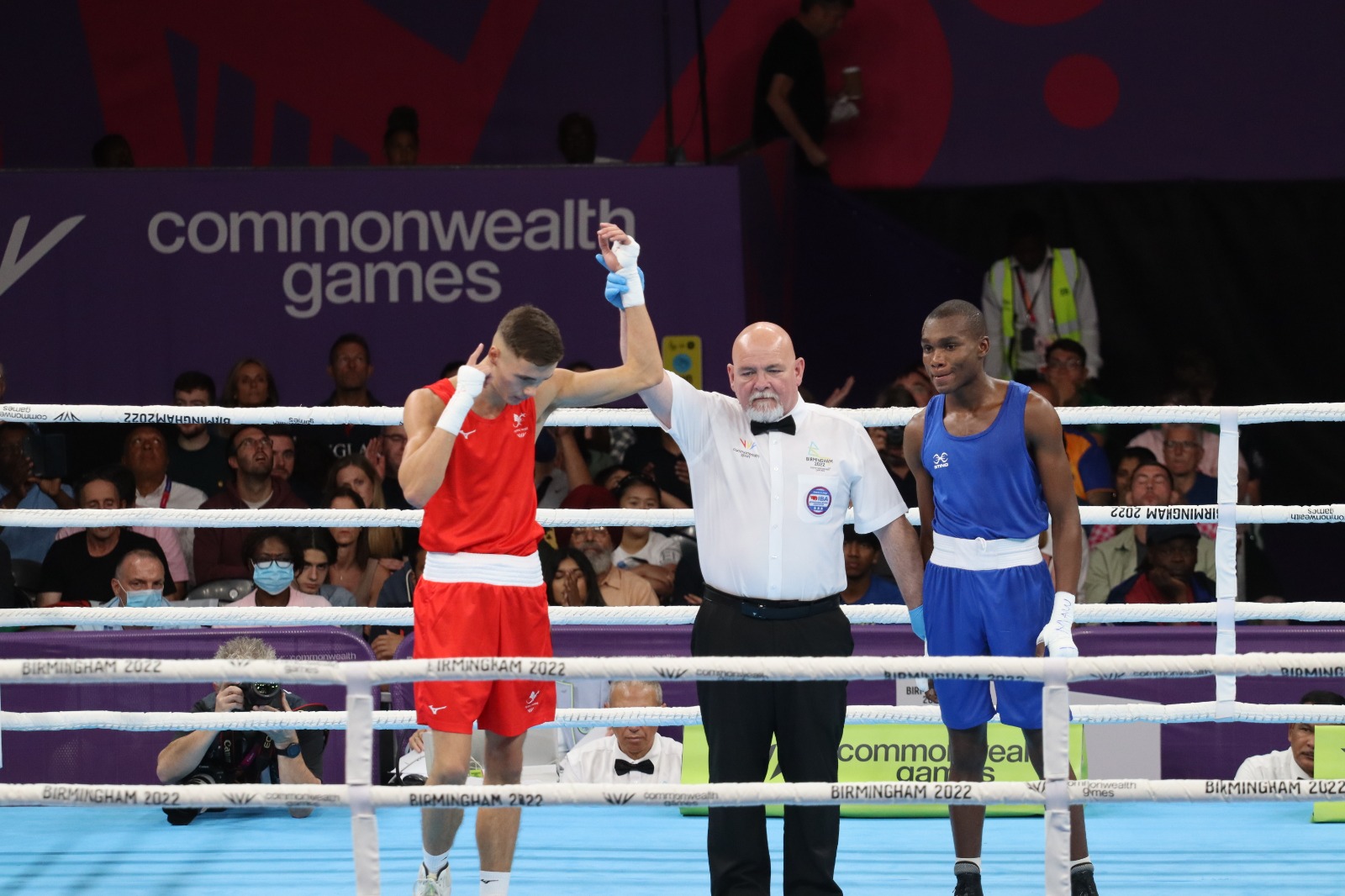 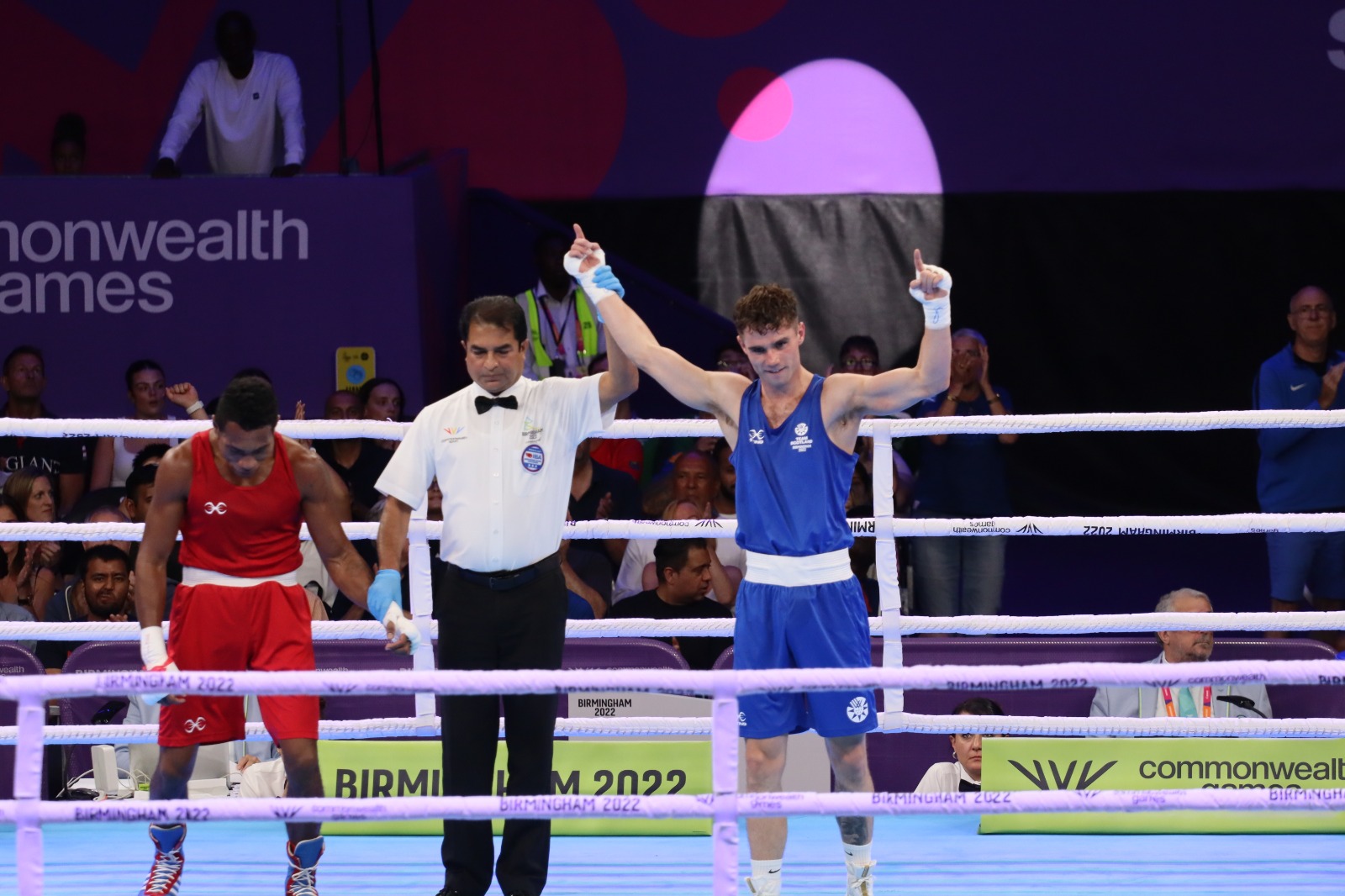 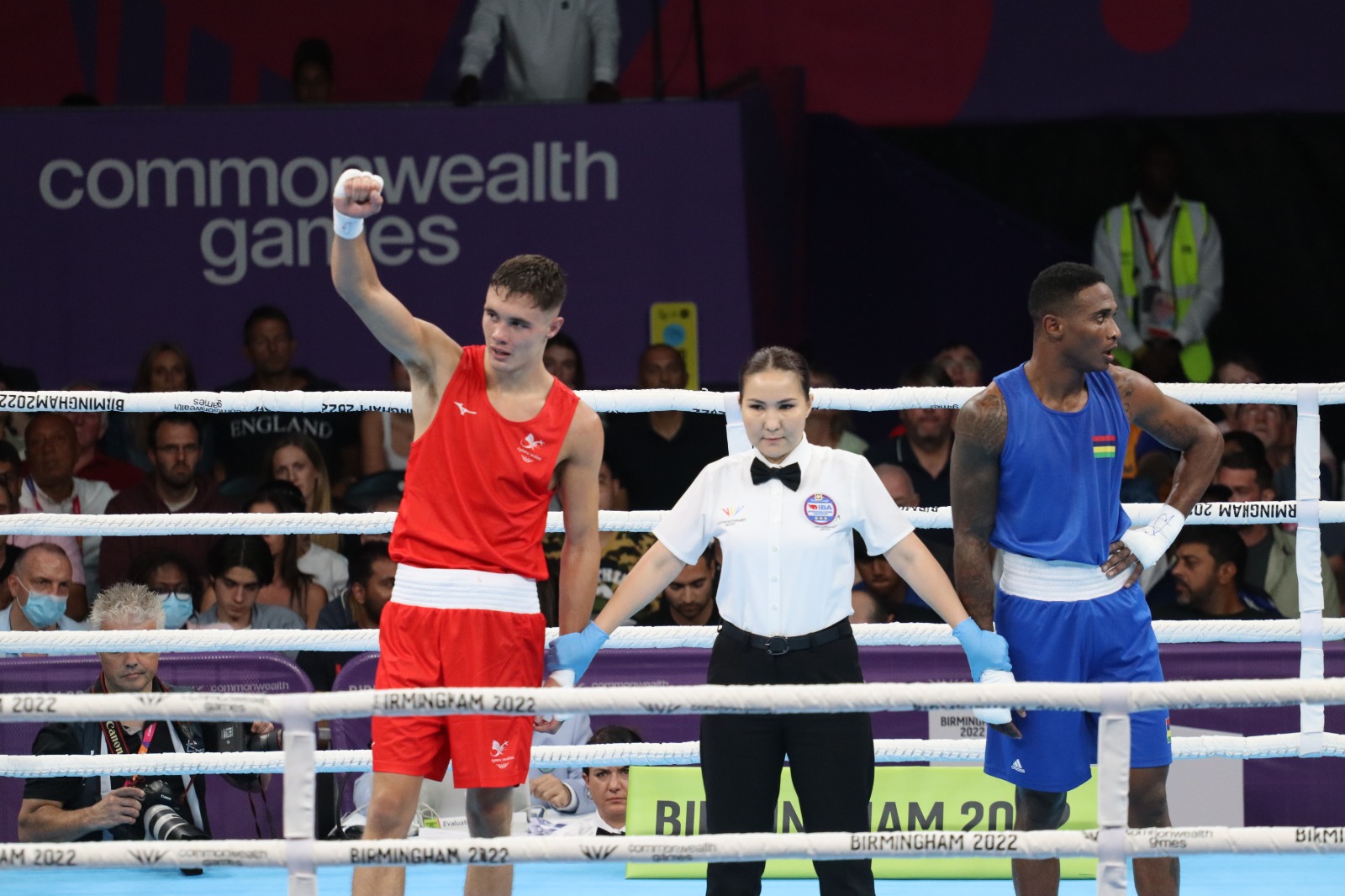 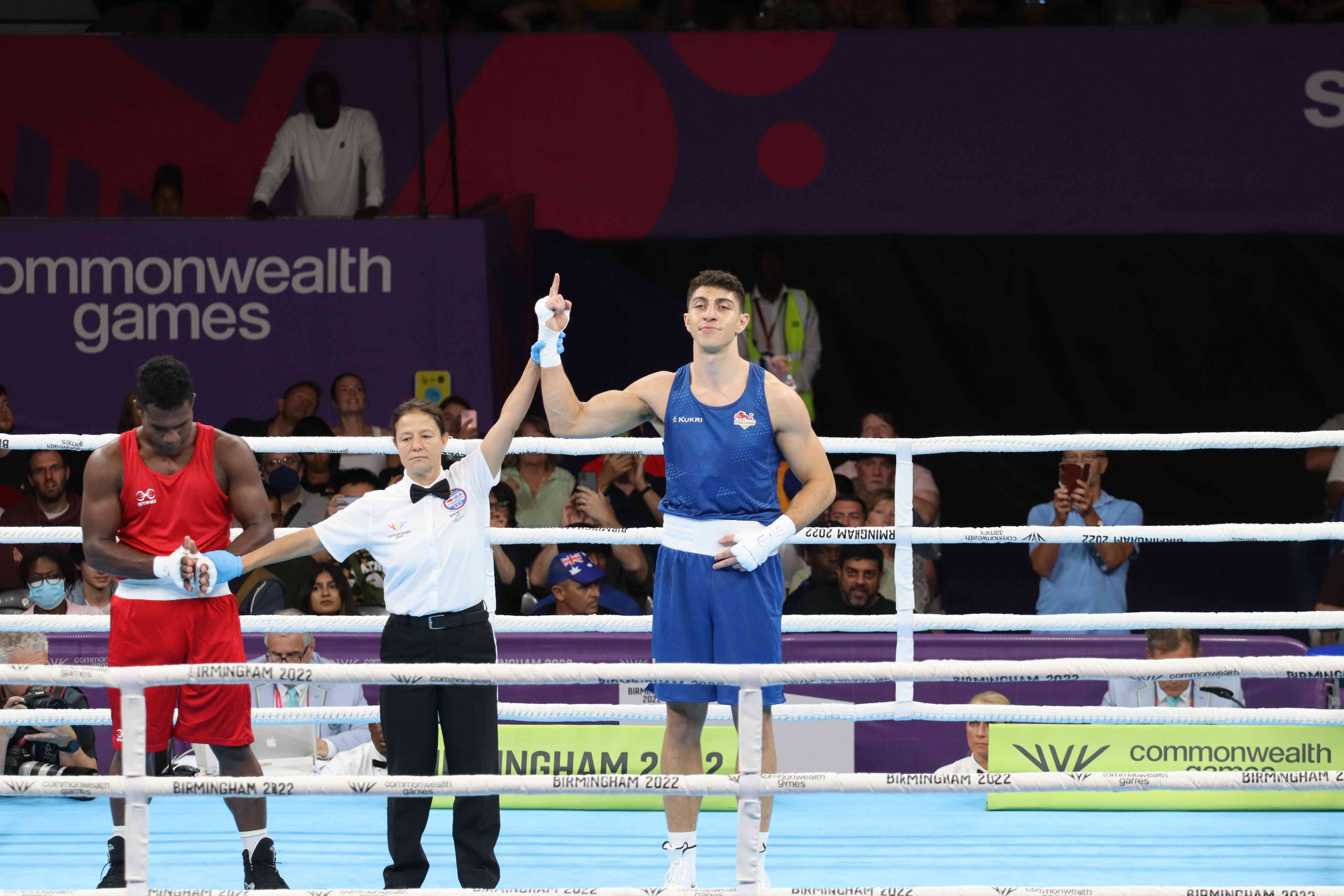 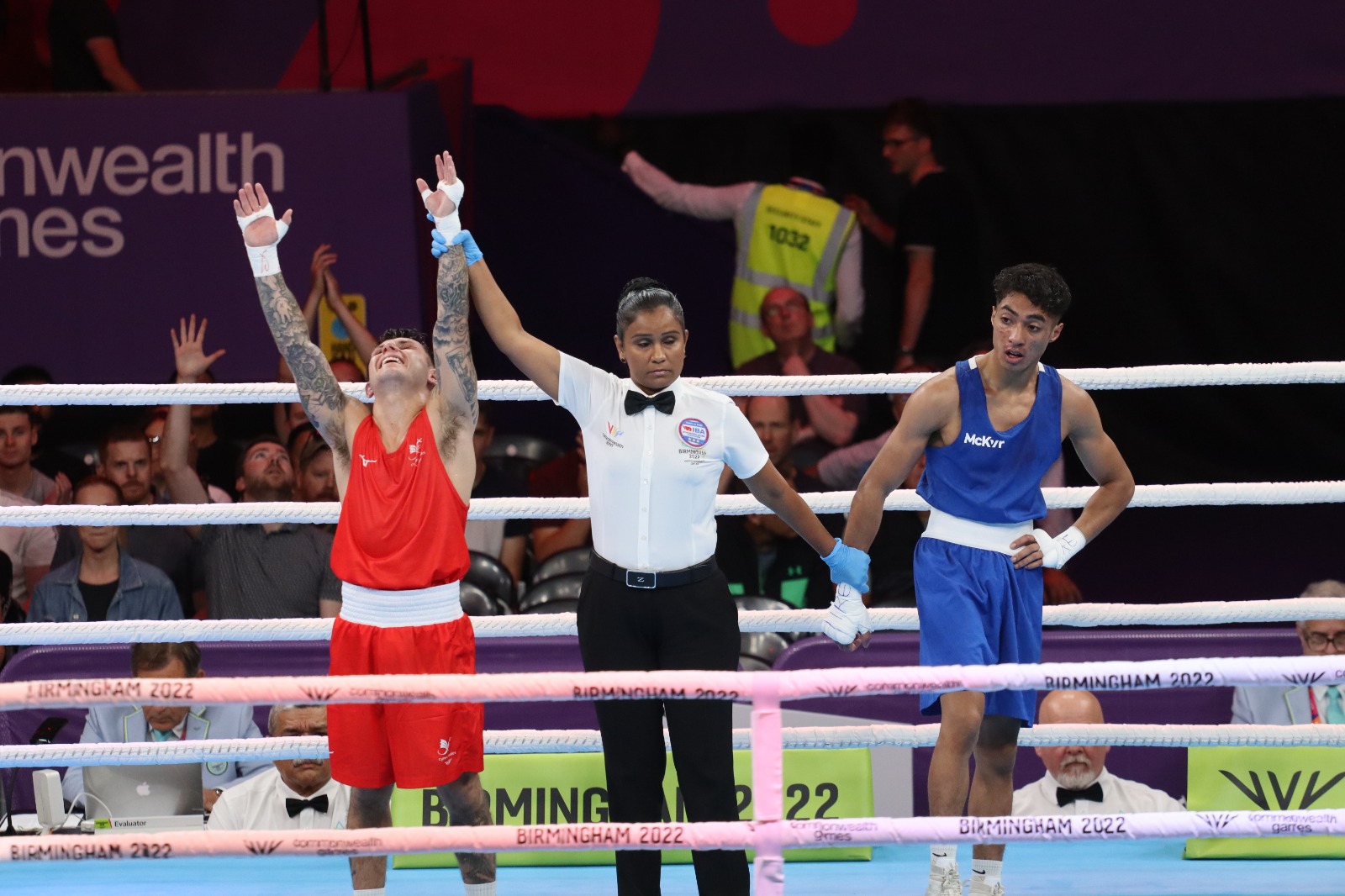 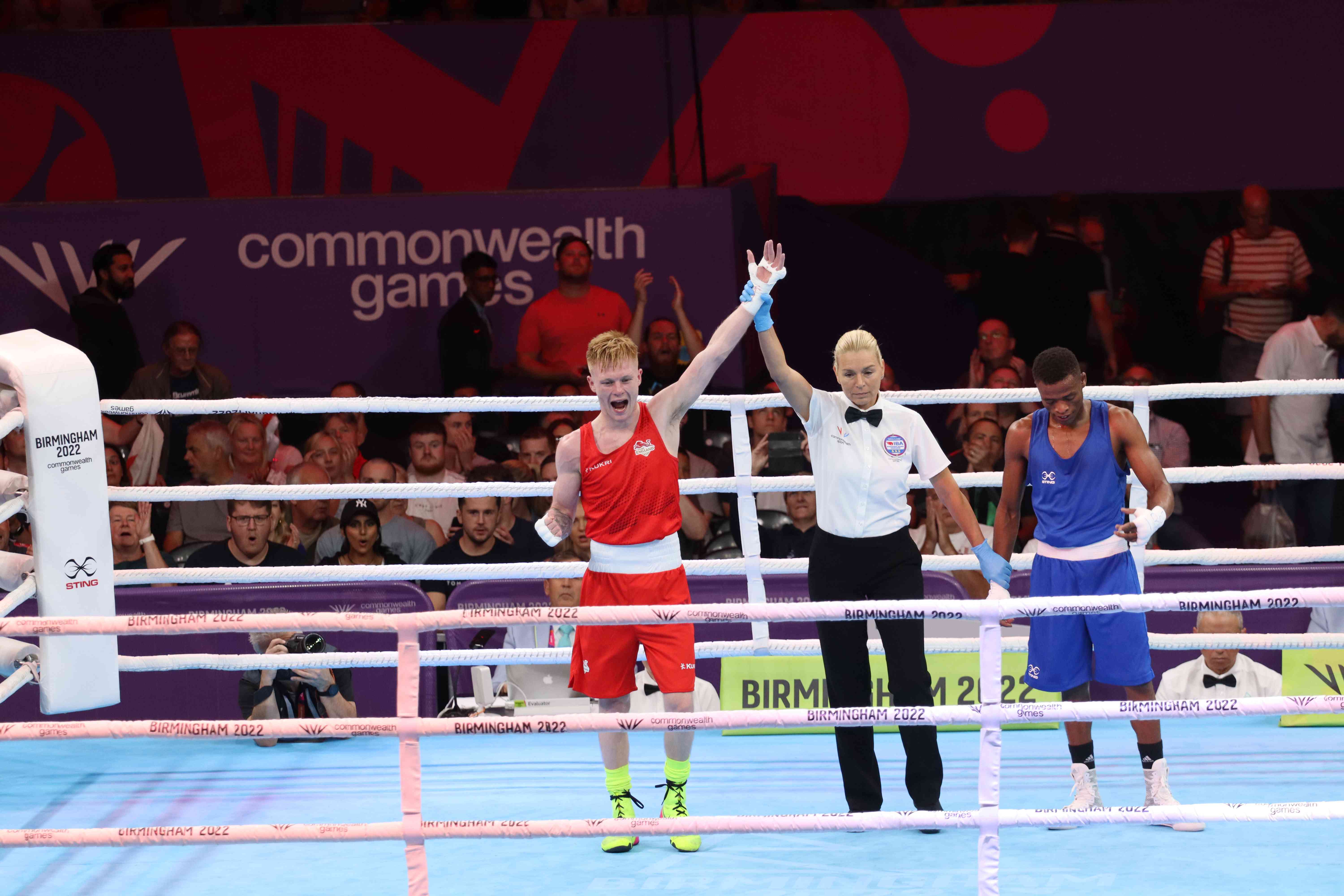