Wins for England’s Demie-Jade Resztan, Savannah Stubley, Lewis Richardson and Aaron Bowen, Scotland’s Reese Lynch and Sam Hickey and Wales’ Rosie Eccles and Taylor Bevan means they are guaranteed to leave Birmingham with at least a bronze medal ahead of the semi-final stages due to take place on Saturday 6th August.

There was disappointment amongst the success though as Helen Jones, Jodie Wilkinson, Kerry Davis and Joe Tyers all missed out on joining their teammates at the medal stages following defeats.

Reese Lynch in his third bout of the competition already, started the day’s action in style when he beat the reigning 2018 Commonwealth Games champion Jonas Jonas of Namibia via a comfortable unanimous points victory.

The Scot, with a medal secured, will take on Canada’s Wyatt Sanford for a chance to book a place in the light-welterweight final.

Lynch said: “It’s a dream come true so far, I’ve been thinking about it every night and going to sleep thinking about boxing and winning the quarter-final and now I can focus on the next one.

“It was good to beat him (Jonas). I’m here to make statements and show why I’m capable of winning gold and why I can beat people like that.”

Like Lynch, England’s Lewis Richardson stepped through the ropes for the third time in Birmingham and like his GB Boxing teammate, made no mistake in ensuring he reaches the semi-final stages.

In a bout that included a particularly action packed second round, the European silver medallist was declared victor via unanimous points decision over Guerney’s Billy le Poullaint.

Richardson said: “I feel like it was a classy performance. I had to have a war in my last fight against the Ugandan [Yusuf Nkobeza]. I felt that I used my skills and attributes better.

“My hands and feet were both fast and I was able to nullify a dangerous opponent who carries power in both hands.”

“The crowd just keep getting better and better. It feels extra special to box in front of a home crowd, and they give me that extra push in fights.”

“I’m excited to run it back again with Sam Hickey and repeat the success I had earlier this year against him in the European Championships in order to get this gold medal.”

He will now face Scotland’s Sam Hickey in the middleweight semi-final after the fellow GB Boxer once again eased his way into the next round of the competition after he stopped Adeyinka Benson of Nigeria in scintillating fashion in the third round of their contest.

It will be a repeat of the European Championships semi which saw Richardson progress on that occasion.

Hickey said: “To this for my country and my city, Dundee, it means a lot to me.

“What a year I’ve had. Two European bronze medals at U22 level and senior and to be guaranteed to be on the podium here is brilliant and I’m grateful for every medal I get but I’m sick of bronze and silver medals, I’m here to get gold.

“I’ve just got to focus on myself and perform. Me and Lewis (Richardson) are pals out of the ring, we’ve sparred loads of rounds and the Europeans was close but I’m going to go in there and perform to the best of my ability and aim to get the win.”

Kicking off the evening session was Demie-Jade Resztan in the minimumweight contest. Despite a tight first round of her opening bout of the competition, Resztan came out on top via unanimous decision against Zambia’s Margret Tembo and will now face Botswana’s Lethabo Modukanele in the semi-final stages.

Resztan said: “I really enjoyed that, but I also think I over thought it a little bit. I didn’t perform to my best and the ring rust was there but now I’ve got the first one out the way I’ll be ready to go again.

“With all my friends, family, and the crowd as well in England it’s amazing to be here. The next stop is the top. To get gold. It’s what I came here to do.

“It’s my mini-Olympics being a 48kg boxer so I’m not stopping until I get there.”

Competing for the first time in Birmingham was Savannah Stubley.

The 21-year-old put in a performance beyond her years against Yetunde Egunjobi of NIgerbia to secure at least a bronze medal and tee up a semi-final clash with reigning world champion Zareen Nikhat of India.

Stubley said: “It was nerve-wracking. I was a bit nervous. It was my first bout as a GB Boxer and it’s at the Commonwealth Games with a big crowd, but I managed to get the win.

“I was a bit rusty but the more fights I have the better I’ll get. She (Egunjobi) was difficult. I didn’t know much about her so it was a case of getting in there, seeing what she’s like in the first round and picking her off from there.

“It hasn’t really sunk in yet to have secured a bronze medal, it’s a dream come true! Who would have thought? I’ve just got onto GB Boxing and now I have a Commonwealth Games medal.”

Rosie Eccles became the first Welsh boxer to guarantee a medal at this year’s Commonwealth Games when she got the better of Tokyo 2020 bronze medallist Lovlina Borgohain of India.

Eccles, who won silver on the Gold Coast in 2018, came back from losing the first round to seal a narrow 3:2 victory to progress to the light-middleweight semi-final where she will face Northern Ireland’s Eireann Nugent.

The light-heavyweights concluded the evening’s action as firstly Aaron Bowen, in what was a contender for bout of the day, beat India’s Ashish Kumar via split decision (4:1) to seal a semi-final place and set up a meeting with fellow GB Boxer, Taylor Bevan.

Bowen said: “I’ve boxed in front of hundreds before, but there’s something about this home Games that even if I’d brought no one the roar would be amazing.

“I just love winning fights. That bronze medal is a great extra to have. To get a medal, I’m now part of history, for England, for Coventry.

“But I want that gold now. I’ve got a little taste for what it could be and it’s going to double when I get to the final.”

Bevan once again put in a convincing display to guarantee Wales’ second medal of the day, this time beating Jamaica’s Jerone Ennis via unanimous decision.

Beva said: “In the first fight, he cut his opponent by coming in low with his head, so I kept my head out of the way, boxed him at long range and then moved my feet. It went to plan.

“I’ll probably do a light bit of training tomorrow, a bit of stretching and just chill out really. I’ve felt fresh for every fight, I’m so fit at the moment. I’m sure I’ll be fresh to go again.”

Wales’ Helen Jones and England’s Kerry Davis, Joe Tyers and Jodie Wilkinson were also in action on day six but were sadly beaten in their respective quarter-final bouts following unanimous defeats for Jones and Davis whilst Tyers and Wilinson narrowly missed out on the chance of a medal via respective 4:1 and 4:0 split decisions.

In tomorrow’s action (Thursday 4th August), we have ten GB Boxers competing to guarantee a medal.

Up first in the women’s lightweight contest is Gemma Richardson at 13.30, who faces the Isle of Man’s Jade Burden.

She will soon be followed into the ring by welterweight’s Ioan Croft of Wales and Tyler Jolly of Scotland when they take on Malawi’s Luwis Mbewe and Papua New Guinea’s Neville Warupi at 14.00 and 14.15 respectively.

The light-middleweights are up next and European champion Harris Akbar will face a tough test against Tokyo 2020 bronze medallist Aidan Walsh at 14.30 whilst Garan Croft will go up against Mauritius’ Merven Clair.

The final action in the afternoon session comes in the heavyweight division as Lewis Williams will look to follow up the win in which he earned in his opening bout against Arthur Lavalou of Papua New Guinea at 15.00.

Moving into the evening and GB’s flyweight get us underway first with Jake Dodd against Northern Ireland’s Clepson Antonio Paiva at 18.00 followed by Kiaran MacDonald at 18.15 facing Botswana’s Otukile Mahommed.

Sameenah Toussaint will look to reach the featherweight semi-final by beating Australia’a Tina Rahimi at 19.15 and concluding the action on day seven is heavyweight Delicious Orie who will finally make his first appearance of the competition at 21.45 against Trindad and Tobago’s Nigel Paul. 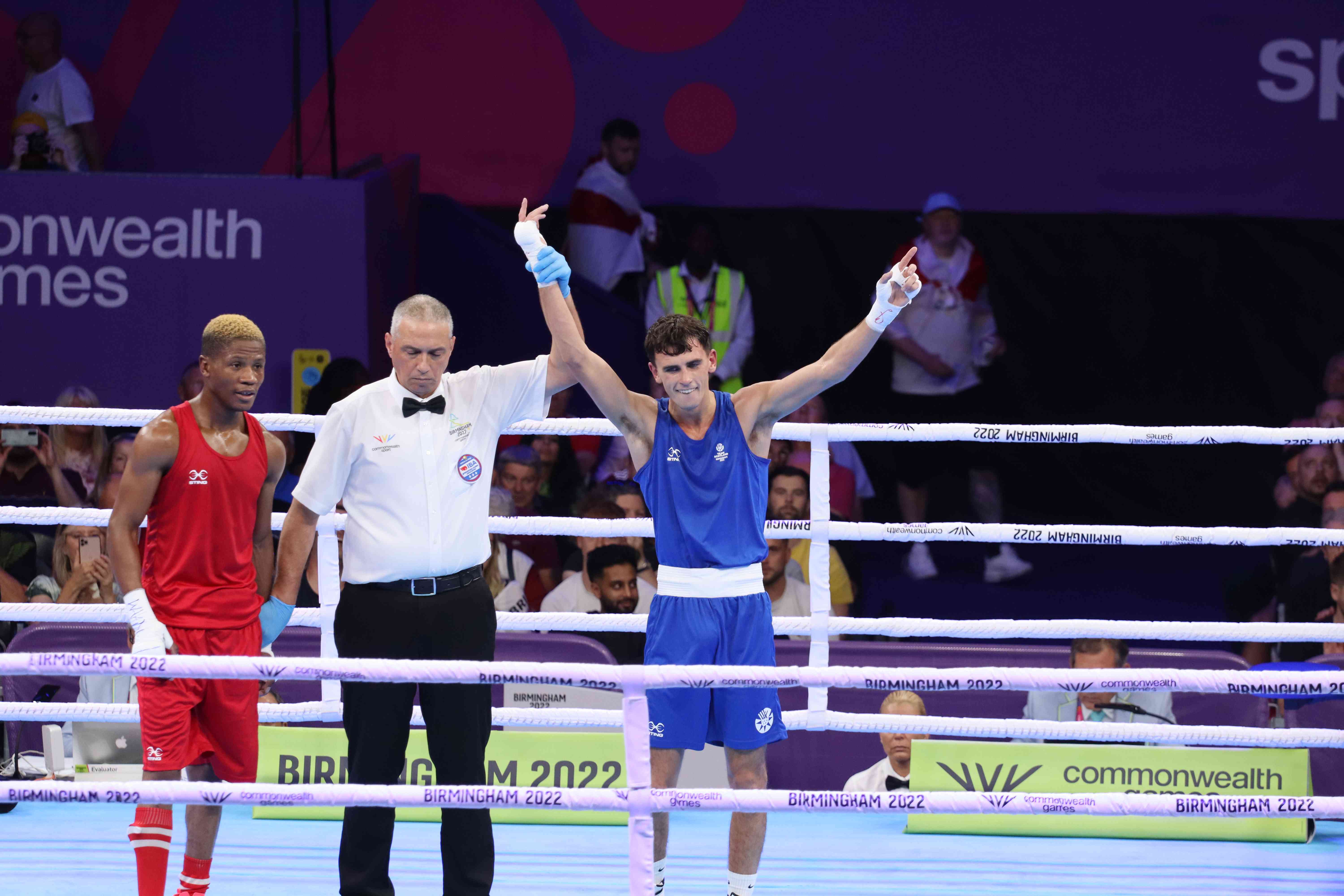 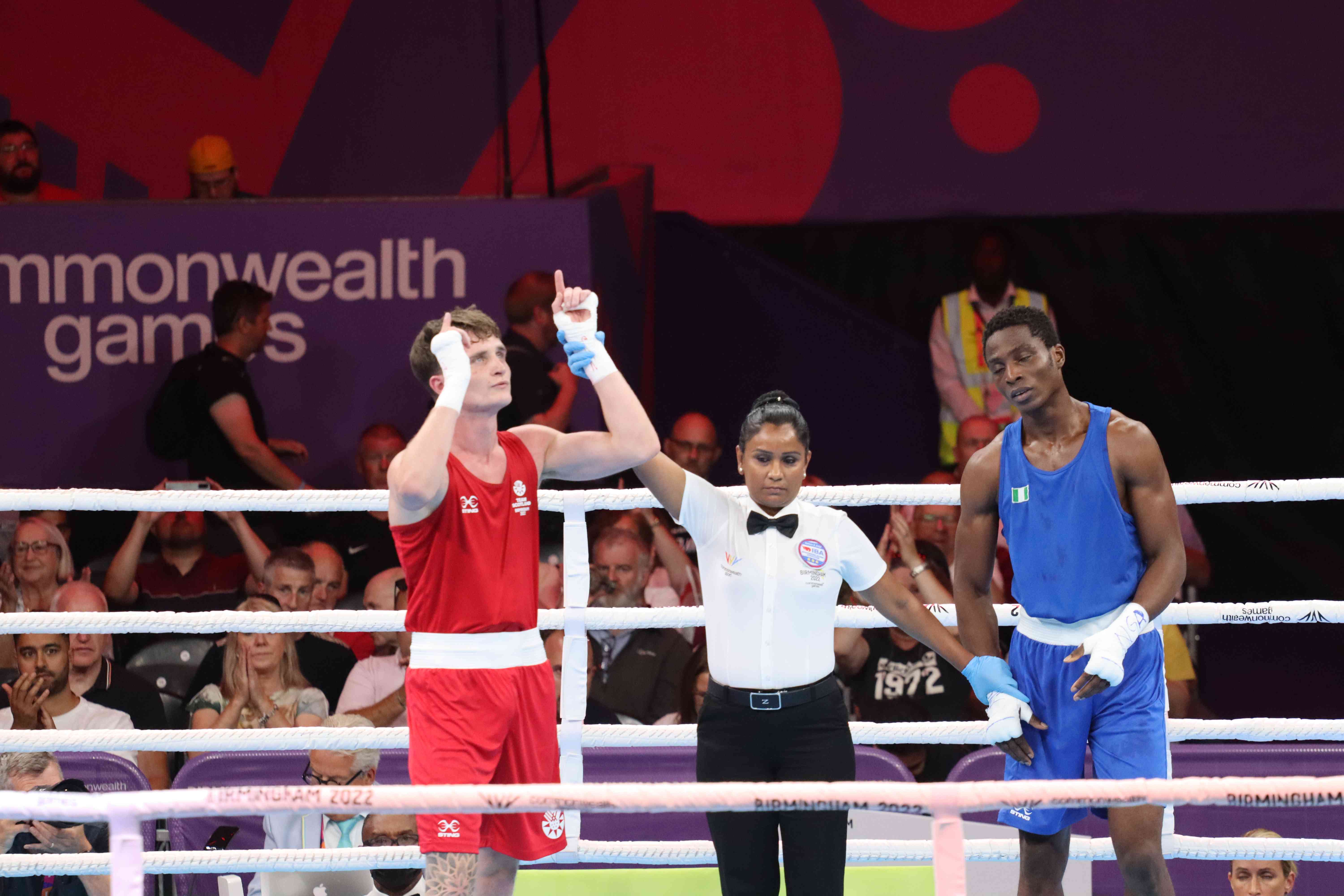 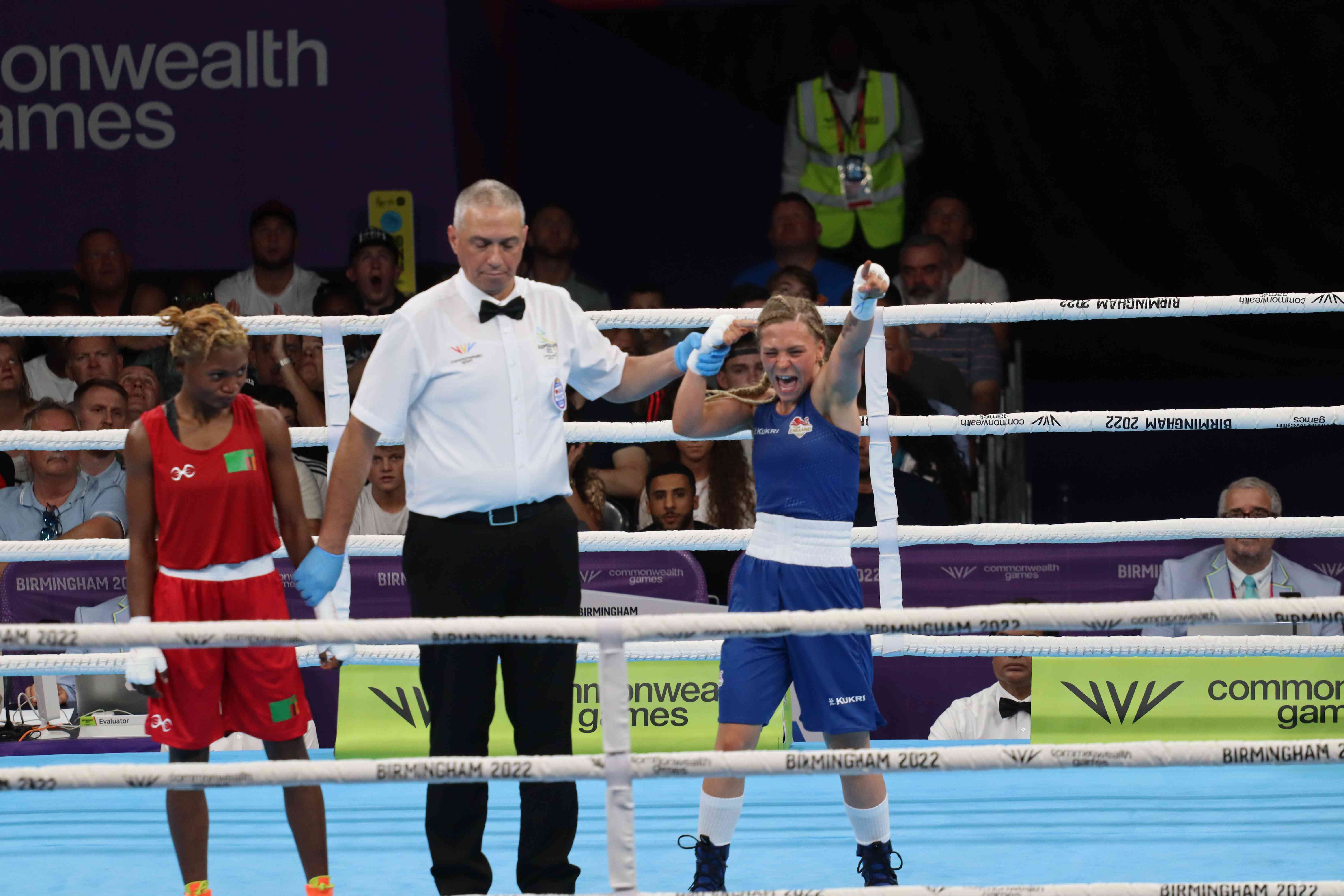 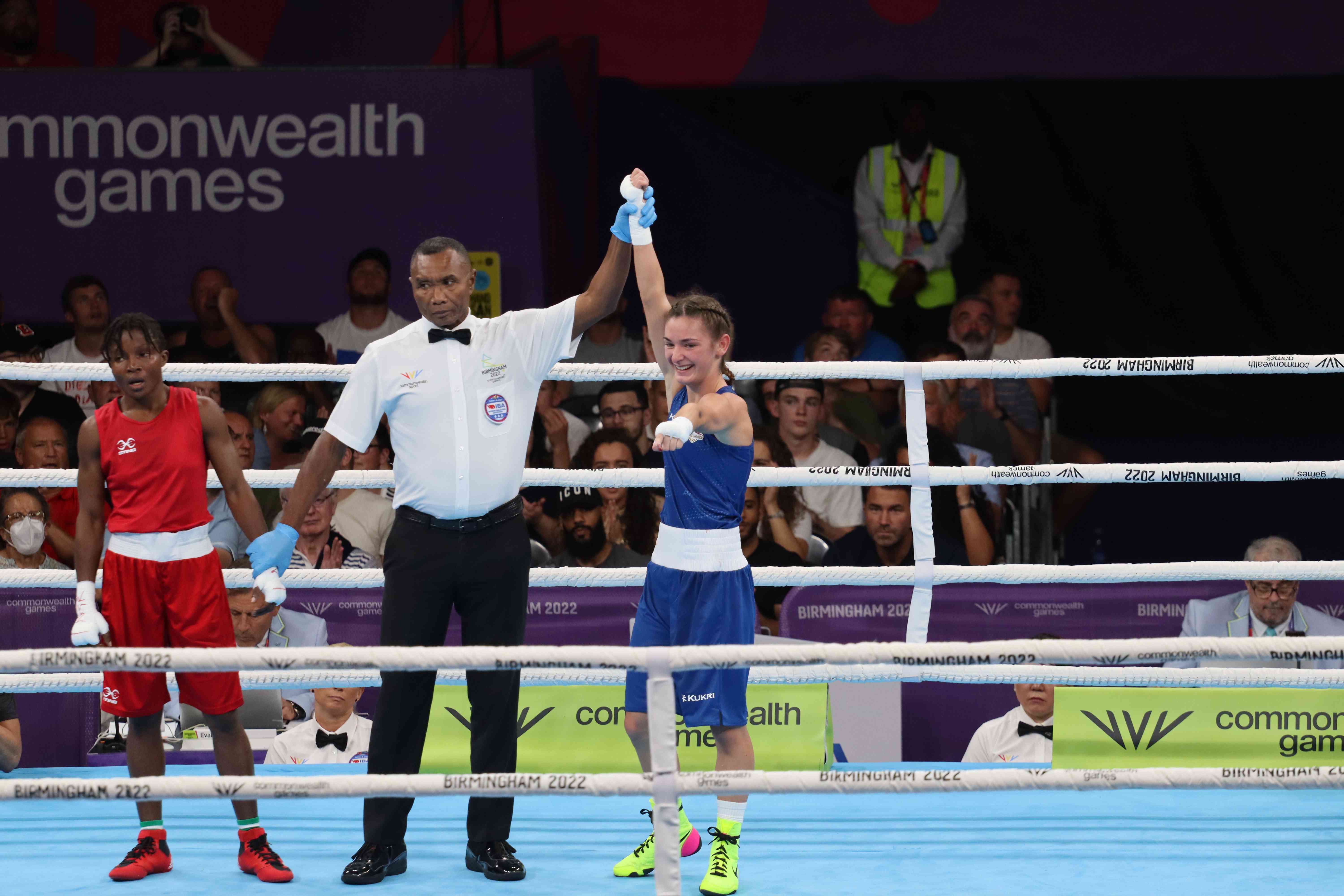 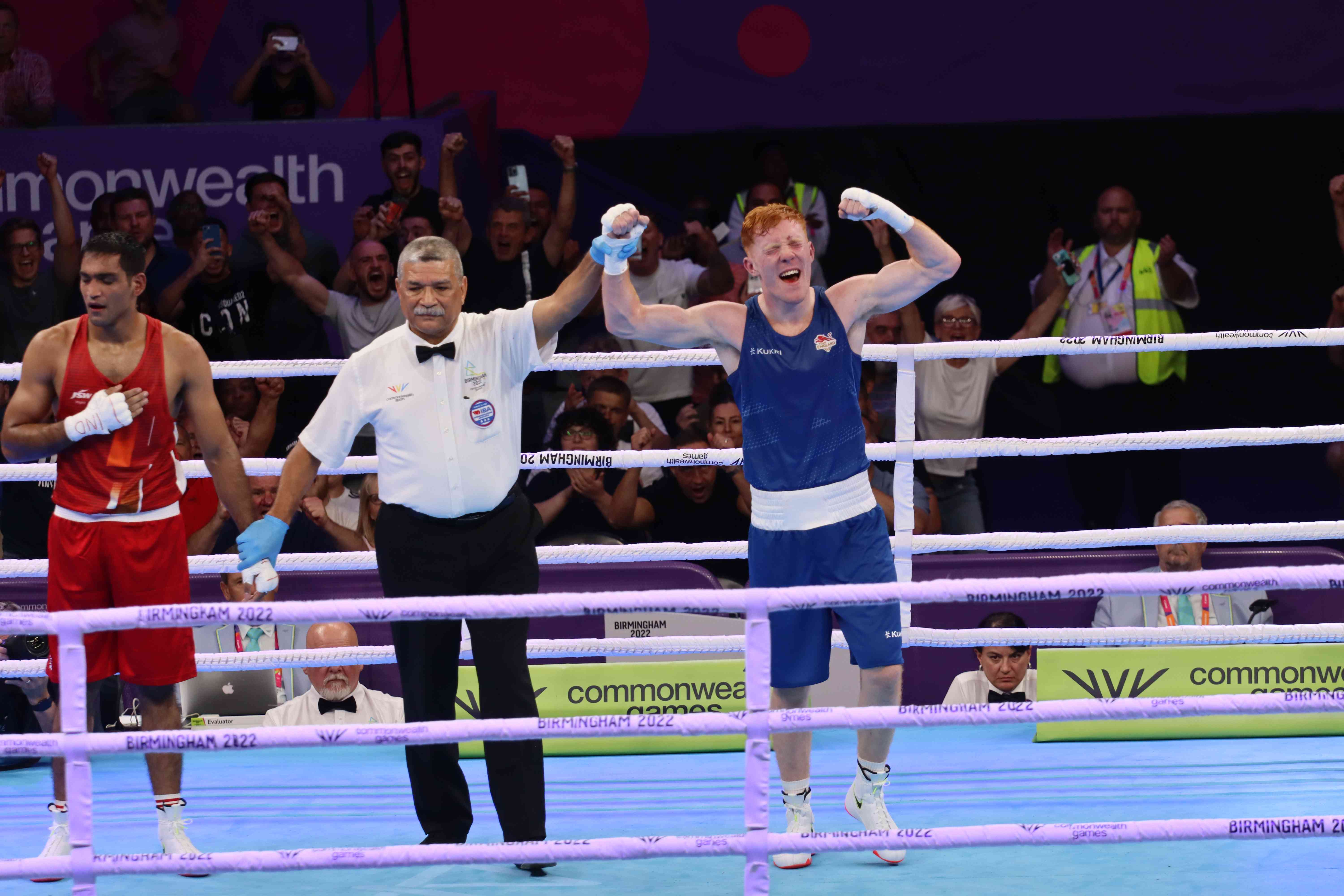 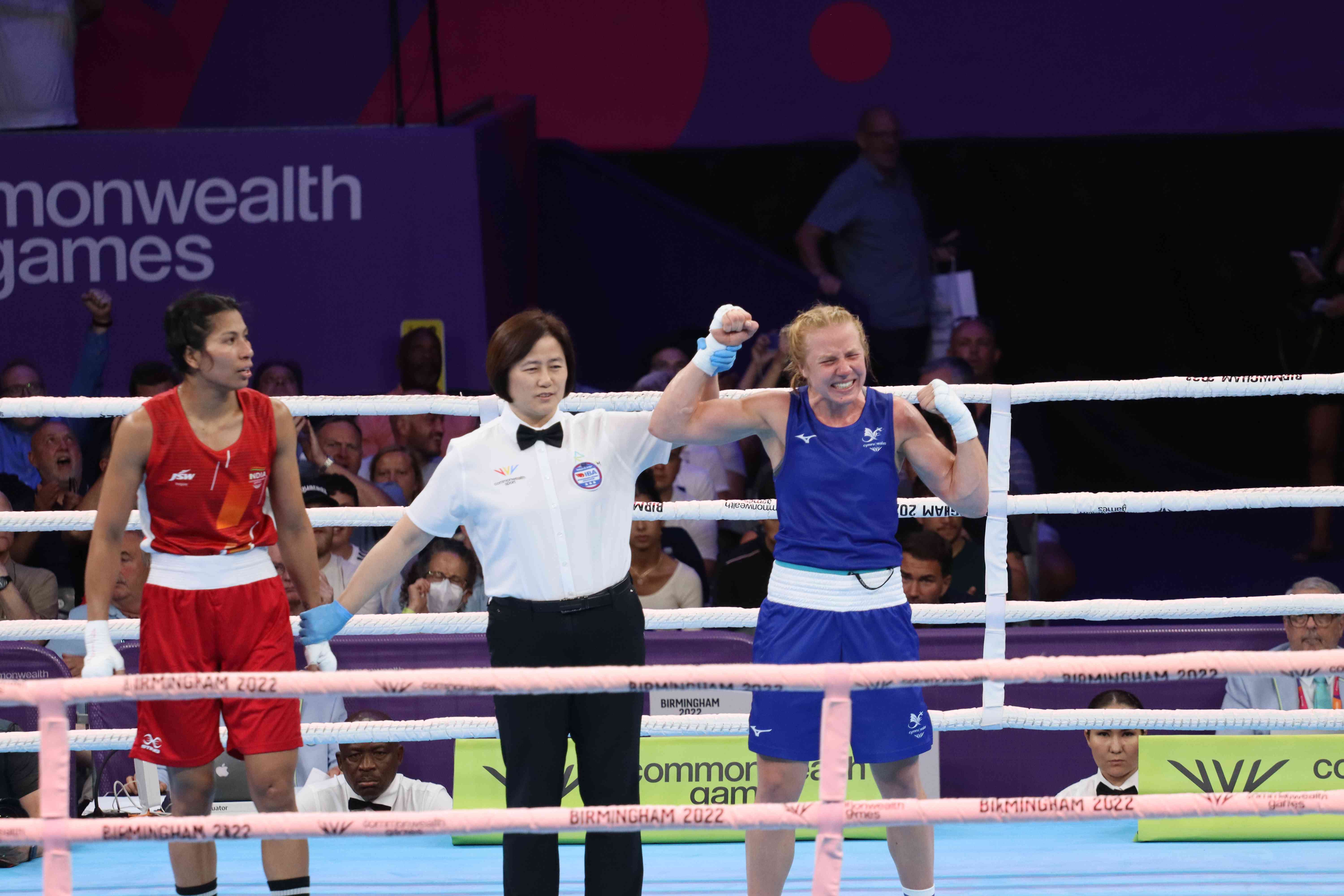 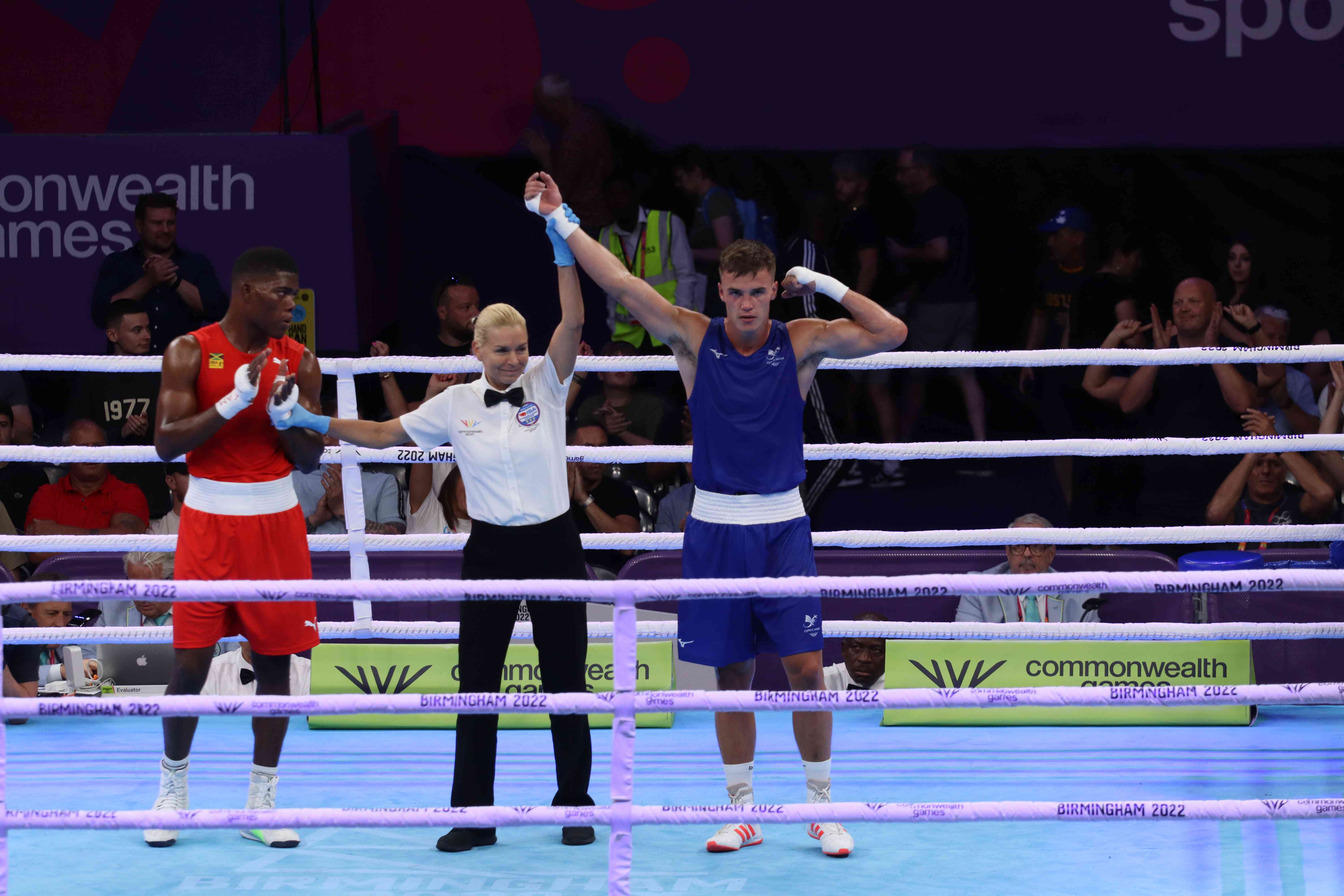