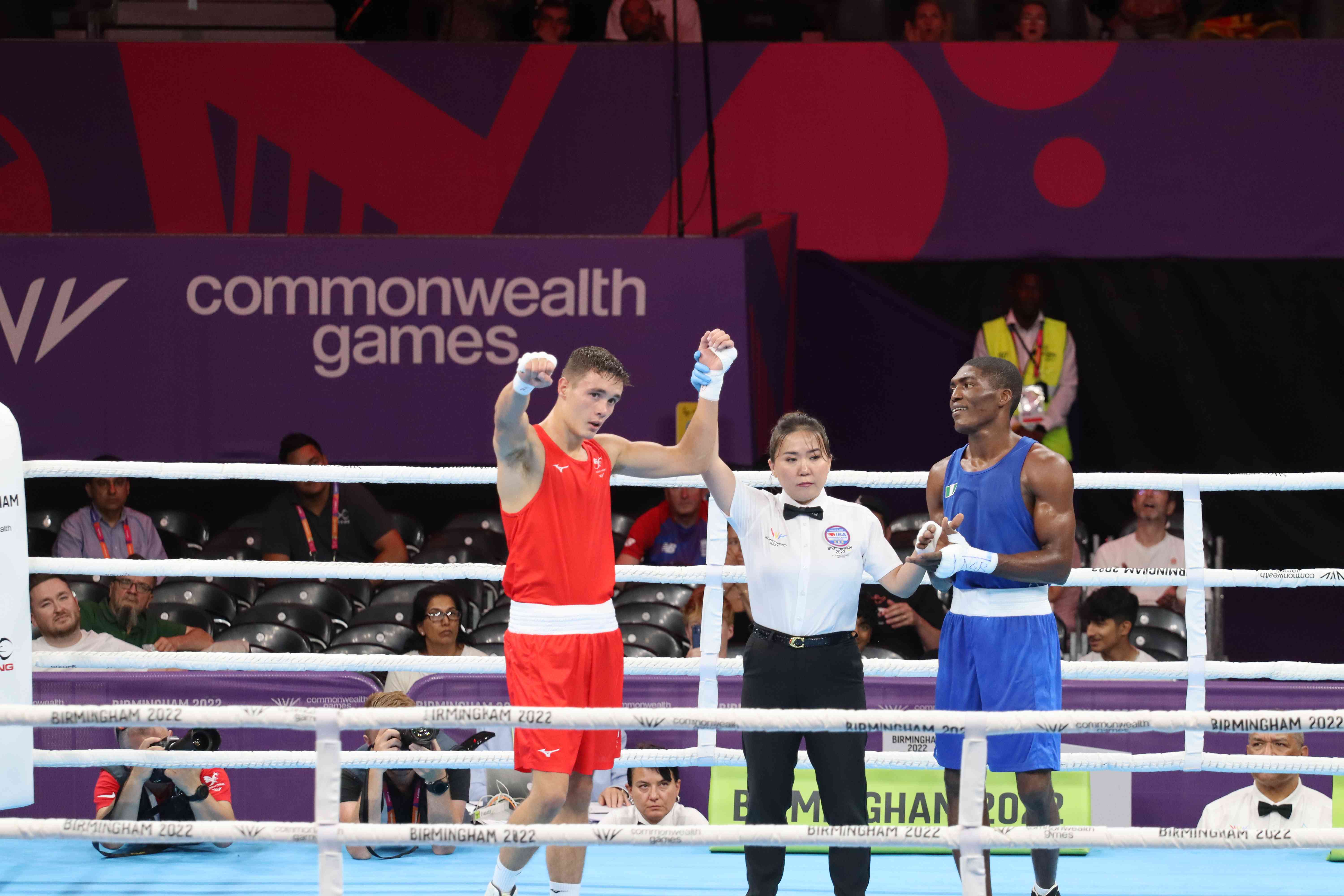 BOXERS from England, Scotland and Wales earned spots in the quarter-finals stages at the Commonwealth Games in Birmingham following victories on day five of action.

Wins for Harris Akbar and Sameenah Toussaint, Tyler Jolly and Garan and Ioan Croft mean that of the 23 GB Boxers competing at the NEC Arena, 22 of them will box for a medal when the quarter-final stages begin tomorrow (Wednesday 3rdAugust).

The day got off to a solid start when boxing for the first time since claiming European bronze in May, Ioan Croft put in a confident display to outpoint Jean Jordy Vadamootoo to seal his place in the welterweight quarter-final.

Ioan Croft said: “It was a good performance. I now immediately look to Thursday when we can secure a medal.

“It was a bit nerve-wracking walking out of the tunnel, it’s been a long week for me having to wait around the village since we arrived in Birmingham so good to just get that one out the way at long last.”

Scotland’s Tyler Jolly is the newest member of the GB Boxing squad, and he made short work of his last 16 tie with Daniel Hylton.

The 23-year-old won the bout via knock out within seconds of the first round thanks to a strong left hand to the body on the Jamaican.

The Scot will be up against Neville Warupi of Papau New Guinea to guarantee a bronze medal.

Jolly said: “It was short and sweet but I’m glad to get the first one out of the way.

“I set it up nicely. I could see he was nervous so I thought I’d put it on him straight away so I jabbed, touched and he came in perfectly with his hands high for me to get a left hook to his body.”

Fresh off the back of being crowned European champion in Yerevan, Armenia, England’s Harris Akbar continued his winning ways with a dominant, unanimous victory against Jessie Lartey.

After outboxing his opponent across all three rounds, he will look to replicate that kind of performance when he takes on Tokyo 2020 bronze medallist Aidan Walsh in the next round.

Akbar said: “It felt really good. Get the first one out of the way, open up the lungs. That’s all it is really. It just felt unbelievable being in there.

“We’ve never had this atmosphere before.

“You have to get used to it, even in the walkout, trying to get in the right frame of mind. The crowd can really motivate you and that’s all I did in there, enjoy myself.”

“This is what I’d have hoped to be the final.

“It just goes to show how hard the Commonwealth is. It’s one of the toughest divisions and it says everything when you’re up there competing.

“It’s going to be a clash of styles for sure, but we’ll see who is the better man on the day.

“Hopefully the home crowd will be different, the English are going to bring it.”

“It’s the self-belief more than anything. The self-belief I have, I can’t even put it into words. If I put in my best performance, no-one will beat me.”In the final bout of the afternoon, Wales’ Garan Croft followed in his brother’s footsteps and ensured it was a day to remember for the Croft household as he too sealed a comfortable opening win of the competition.

Facing Nigeria’s Abdul Afeez Osoba, the 20-year-old won the contest via unanimous points decision and will be up against Merven Clair of Mauritius in the next round.

Garan Croft said: “I stuck to the game plan. I knew he was going to be strong and relentless, but I managed to pick my shots and out box him with my jab and then let the combinations roll.

“In the last round he tried to catch me with a few big shots, but I stayed composed.

“The atmosphere brilliant. A lot of people have come up from my hometown to watch and I can see all the Welsh flags waving so long may that continue.”

Sameenah Toussaint concluded the action for GB Boxers on day five in the women’s featherweight contest.

Facing Wales’ Zoe Andrews, the 20-year-old did enough in the eyes of the judges to be crowned victor of the fiercely contested affair via split decision (4:1).

Toussaint said: “I’m ecstatic. I knew it was close and I knew the second round was 3-2 the other way, so I had to put a big round in at the end.

“I thought I got a bit complacent in the second round so for it to be a split decision was fair enough. I will take a lot from a performance like that on this stage.

“We’re both young so it’s crazy to be at this stage. We know each other as we’re Wales and England and we’ve been training together a bit so there’s no bad blood, she’s a nice girl.”

Twelve boxers for the GB Boxing squad are in quarter-final action tomorrow (August 3rd) where they can all guarantee a medal at the Commonwealth Games with victory.

Boxing first in the afternoon session is Scotland’s Reese Lynch who will be competing in his third bout of the tournament, this time against 2018 Gold Coast champion Jonas Jonas of Namibia at 13.30.

Stepping into the ring for the first time since the opening day is Kerry Davis at 14.30 against Mozambique’s Rady Gramane whilst Lewis Richardson is back in action at 15.00 when he faces Guerney’s Billy le Poullain.

Closing the session is Sam Hickey who will look to beat Adeyinka Benson of Nigeria at 15.15 for a place in the middleweight semi-final.

After having to wait until day 6 to get their tournament underway, Demie-Jade Resztan will compete in the minimumweight contest as well as Savannah Stubley and Helen Jones in the light-flyweight division.

They will take on Zambia’s Margret Tembo, Nigeria’s Yetunde Egunjobe and India’s Zareen Nikhat at 18.15, 18.30 and 18.45 respectively.

Having impressed in his first two bouts, Joe Tyers will be hoping to continue that form when he faces Mauritius’ Louis Colin at approximately 19.30.

In the women’s light-middleweight contest, Jodie Wilkinson is up against Northern Ireland’s Eireann Nugent at 20.00 whilst Rosie Eccles gets her campaign underway versus Lovlina Borgohain of India at 20.15.

The men’s light-heavyweights round off the evening’s action with Aaron Bowne returning to the ring at 21.30 against Ashish Kumar of India whilst Taylor Bevan faces Jamaica’s Jerone Ennis at 21.45. 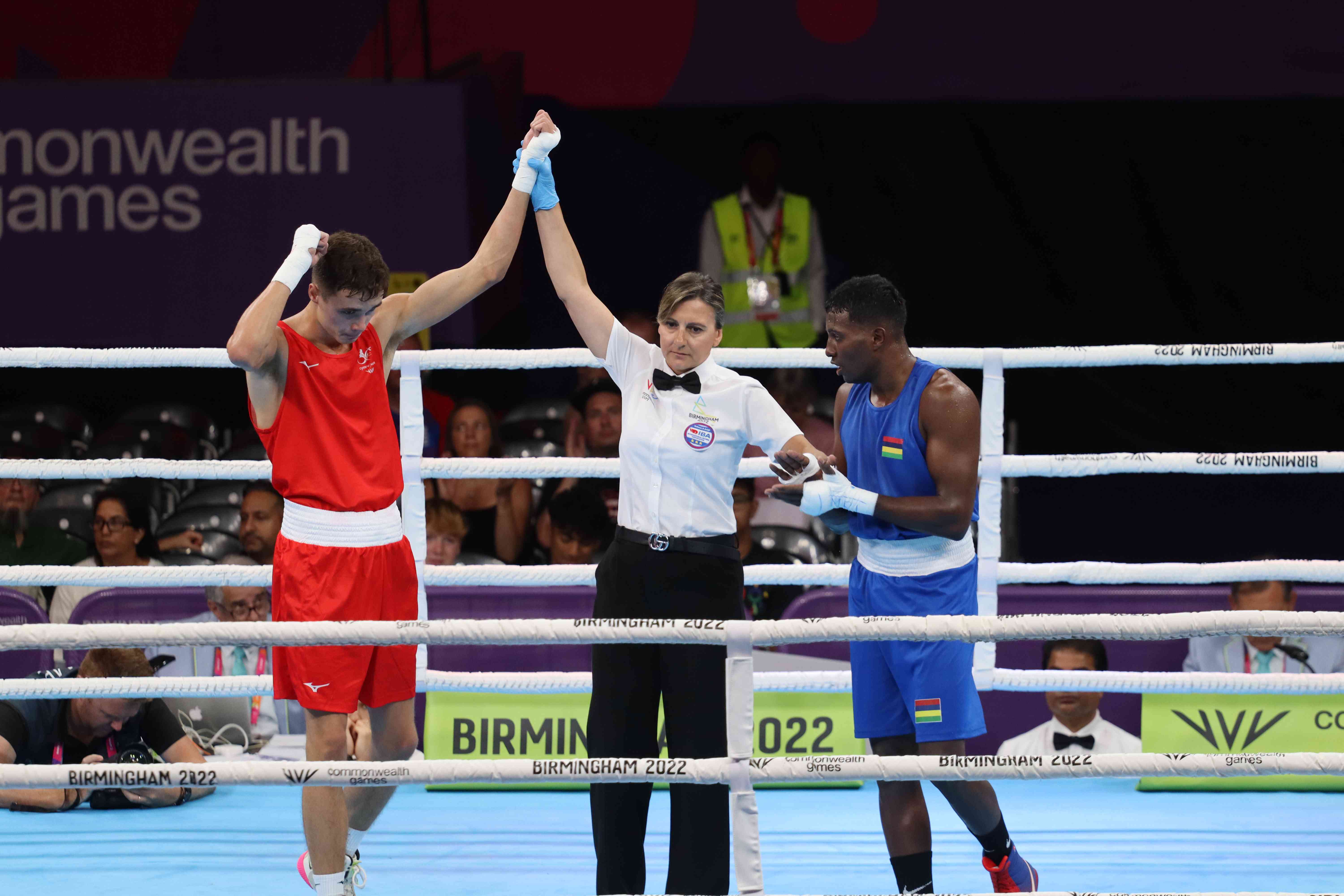 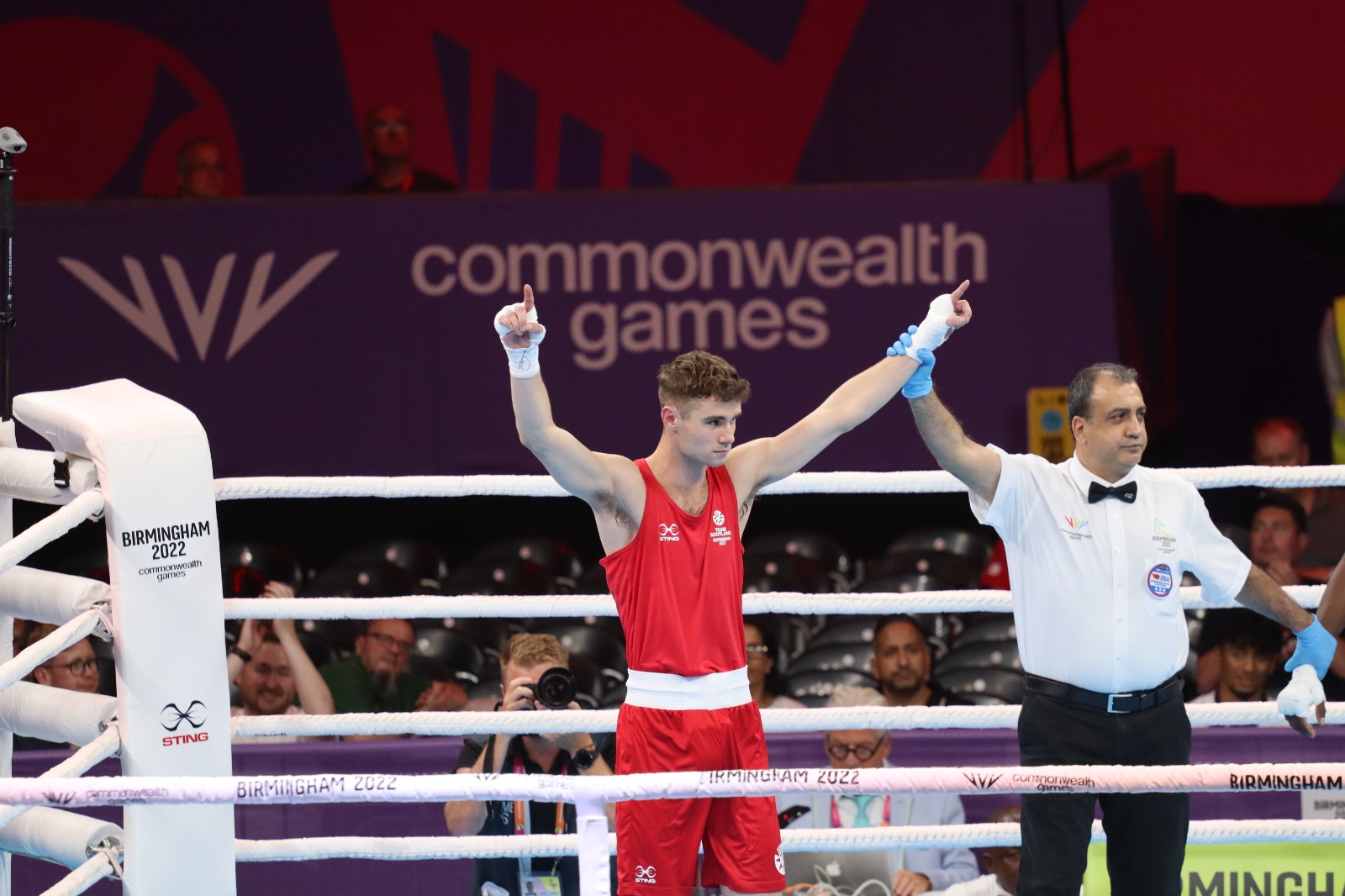 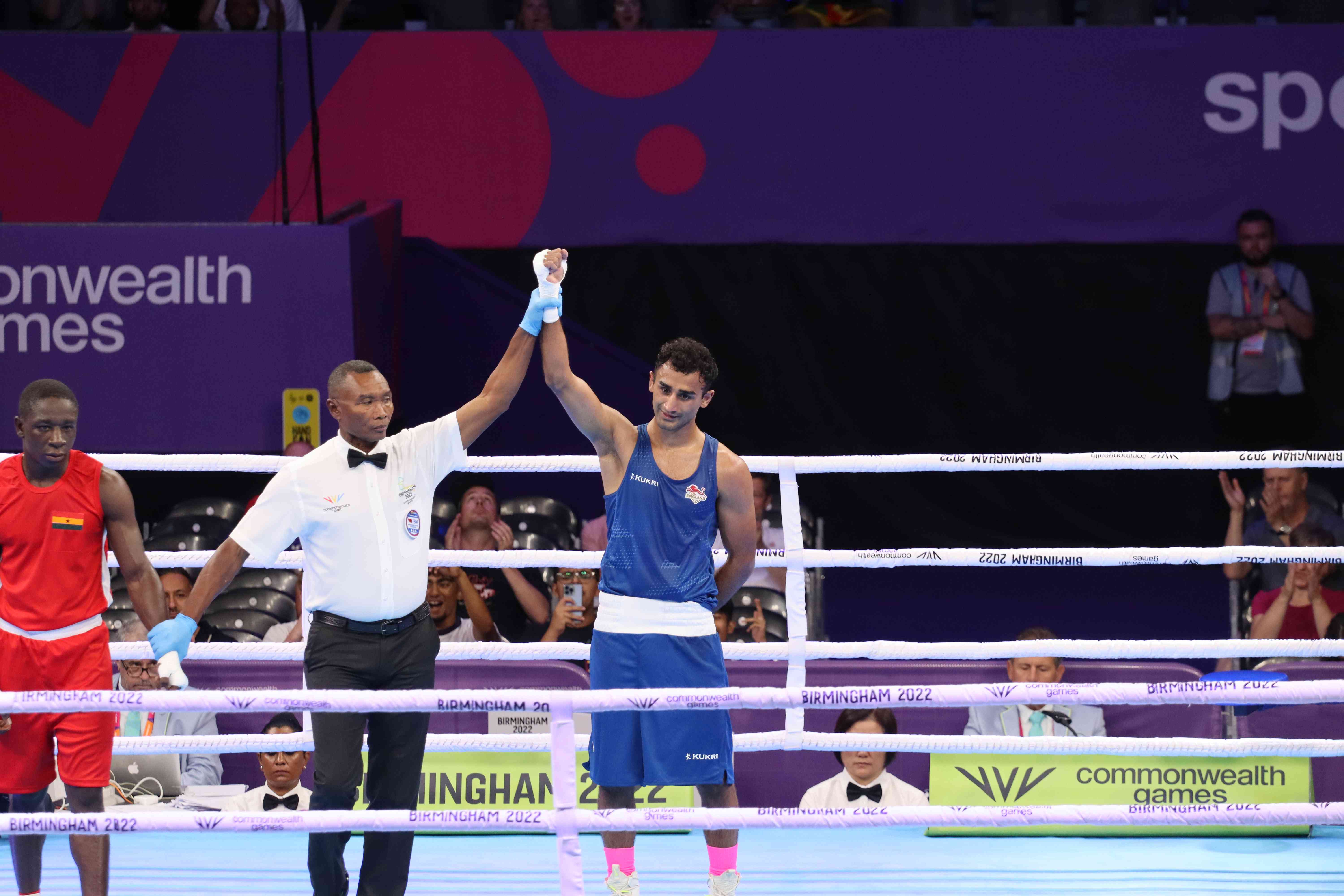 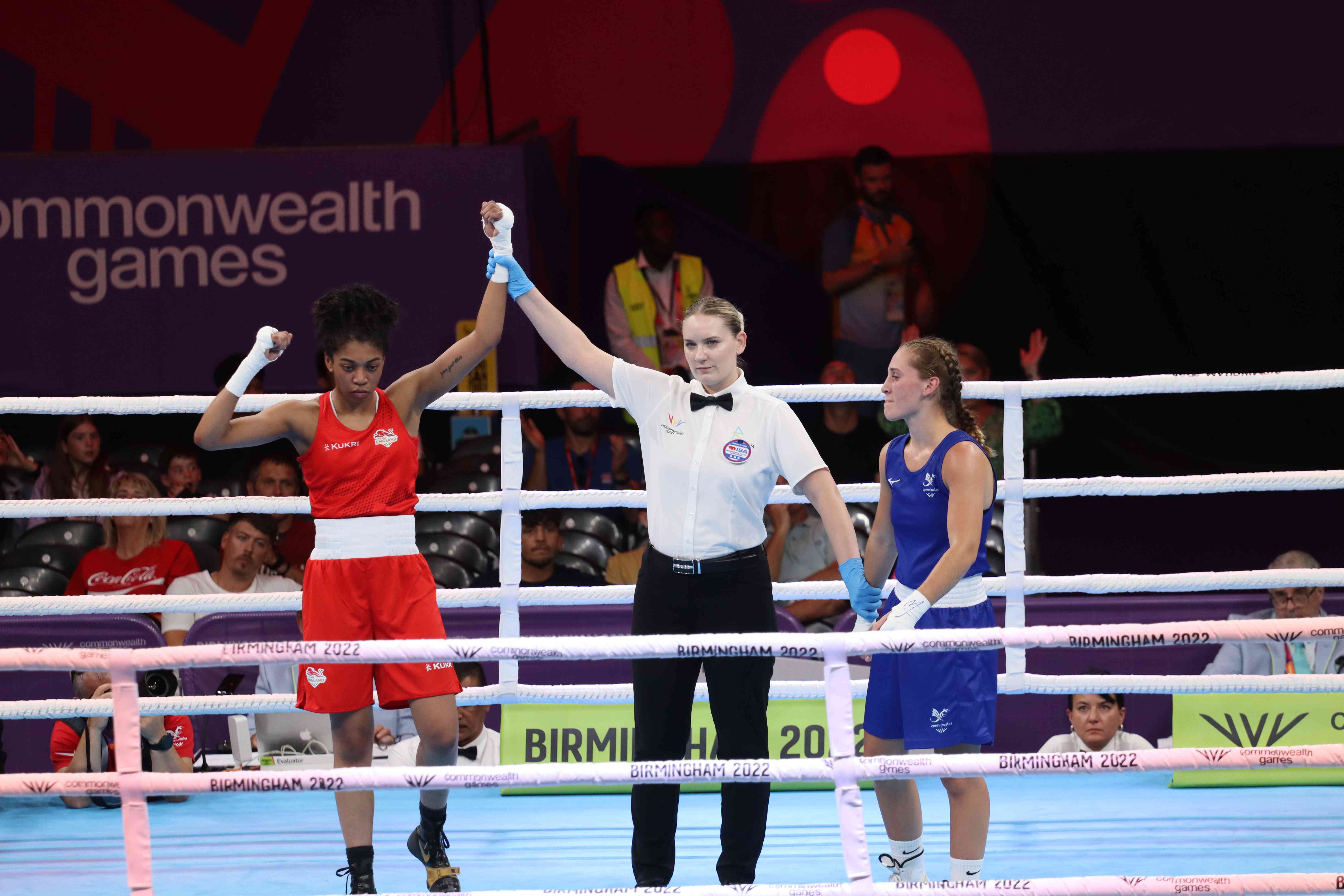