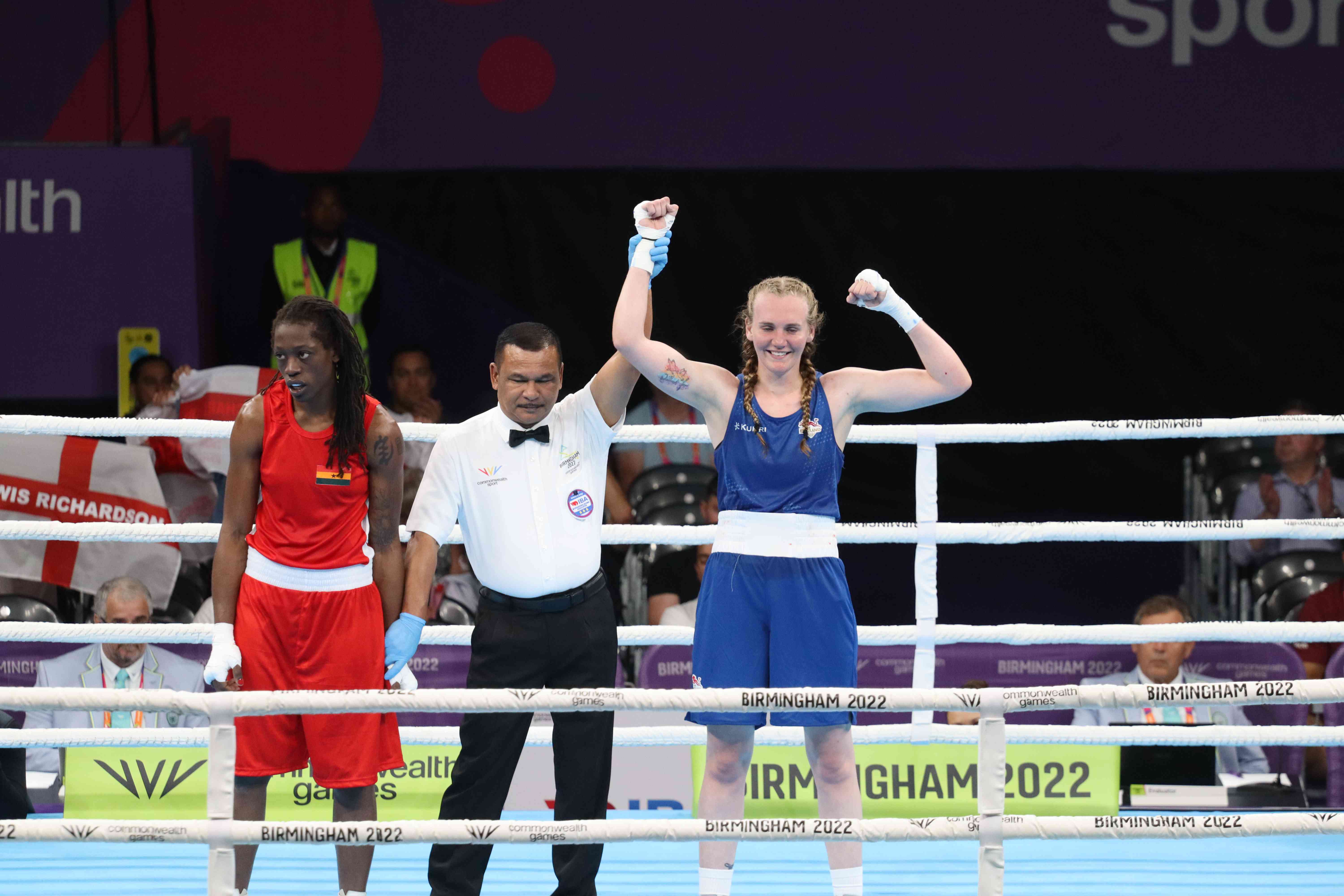 FIVE members of the GB Boxing squad earned wins on a memorable opening day of action at the 2022 Commonwealth Games in Birmingham.

The day got off to a flying start for Great Britain’s boxers as Reese Lynch wasted no time in making his mark on the light-welterweight contest.

The world bronze medallist dominated his opponent, Timon Aaree of Kiribati, so much so that the ref called an end to the bout within the first round.

He will now take on India’s Shiva Taipa for a place in the quarter-final stages.

Lynch said: “It was good to get out and win in that kind of fashion.

“I went out firing, I felt good straight away and I knew I could take him out. Once I set my feet, I was confident enough to stand there and let the hands go.”

Next into the ring and representing England was Kerry Davis. The middleweight took on Ghana’s Ornella Sathoud in a close fought encounter which saw Davis get the better of her opponent via split decision 4:0.

She will now face Rady Gramane of Mozambique in the quarter-final where a win will guarantee at least a bronze medal at these Games.

Davis said: “It was very loud. There was a lot of people!

“I feel like I started a bit slow but once I got into it, I felt fine. I was the first England boxer on and the first female boxer, so it was a little bit overwhelming, but I managed to just block that out a bit and focus on my boxing.

“We all come here for gold, but my next bout will be for a medal, so my focus just now is on winning that.”

In an England vs Wales affair, he earned a convincing, unanimous victory over Haaris Khan to seal a place in the last 16 stage of the middleweight contest.

He must beat Uganda’s Yusuf Nkobeka to reach the quarterfinals.

Richardson said: “It was a really proud moment for me being able to represent Team England for the first time and it feels nice to get that first one out the way.

“There’s always a little bit of nerves going into a tournament but I’m confident in myself and I managed to get the job done.

“I’ve got lots of support behind me. My friends, family, my sponsors, GB Boxing, Team England, and the National Lottery, who provide all us athletes funding and that makes a massive difference to our training and preparations.”

Joe put in one of the performances of the day in the evening session when he convincingly out-boxed Sri Lanka’s Wasa Rajakaruna across three rounds in his opening round of 32 clash.

The Billingham boxer will face Papau New Guinea’s John Ume for a chance to book his place in the light-welterweight quarterfinal – a win away from securing a medal.

Tyers said: “I’m buzzing to get the win in my first bout. I felt I boxed really well throughout.

“The atmosphere in the stadium was great, it’s a proud moment to represent England and I’m looking forward to doing it all over again on Sunday.”

Competing in the final bout of the day for GB Boxers was Team Wales’ Taylor Bevan.

The light-heavyweight faced Onyx Lye of New Zealand and in devastating fashion, Bevan ended the bout within the first round via a knockout, seconds after administering a standing count on his opponent.

He will now face Jancen Poutoa of Samoa in the next round.

First up is Jodie Wilkinson, the light-middleweight will be up against Nigeria’s Bolanle Temitope Shogbamu at approximately 13.15pm.

She will be followed into the ring swiftly by Lewis Williams at 14.00pm. The European bronze medallist will go head-to-head with Nazeer Khan of Pakistan for a place in the heavyweight quarter final. 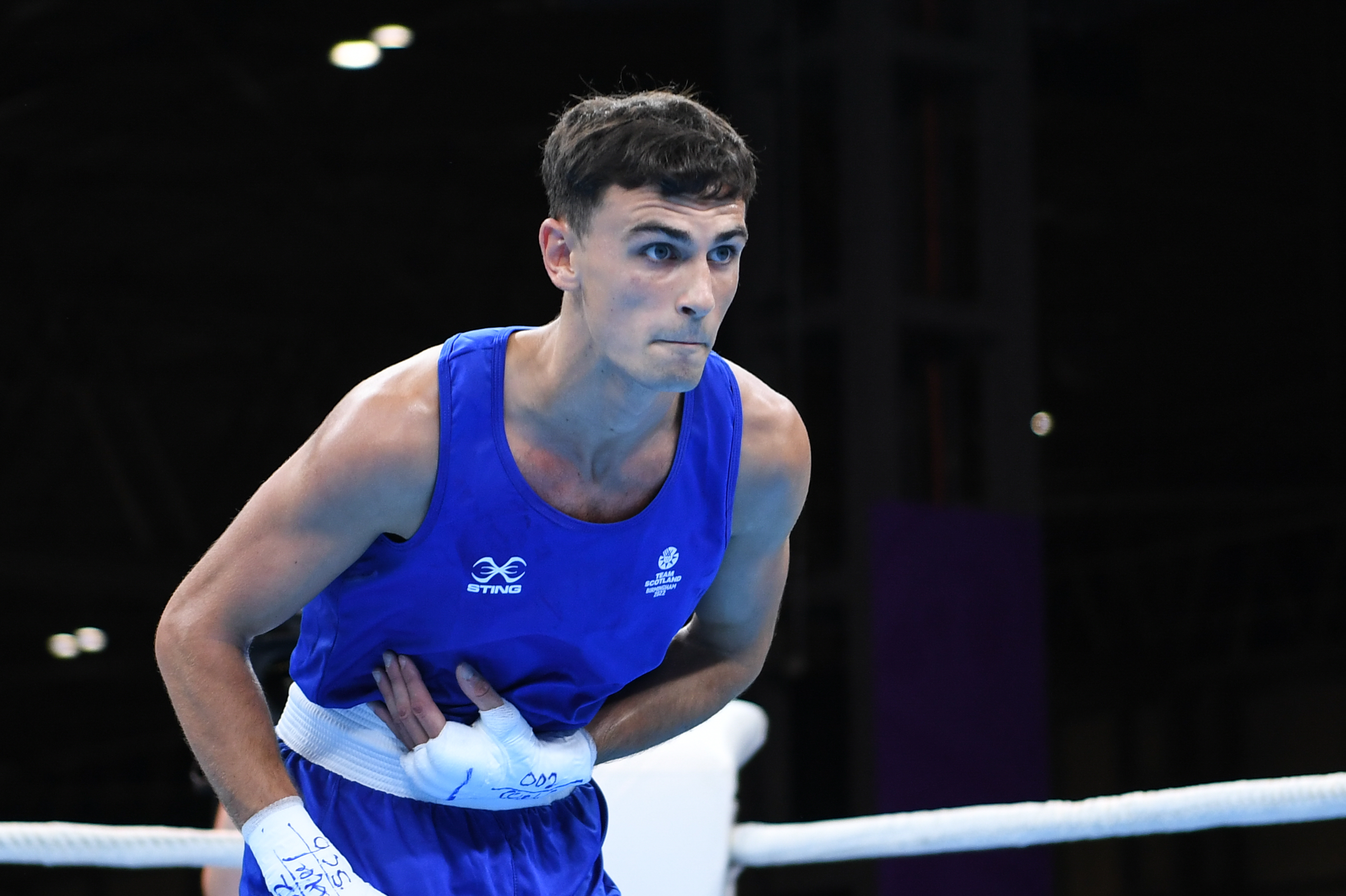 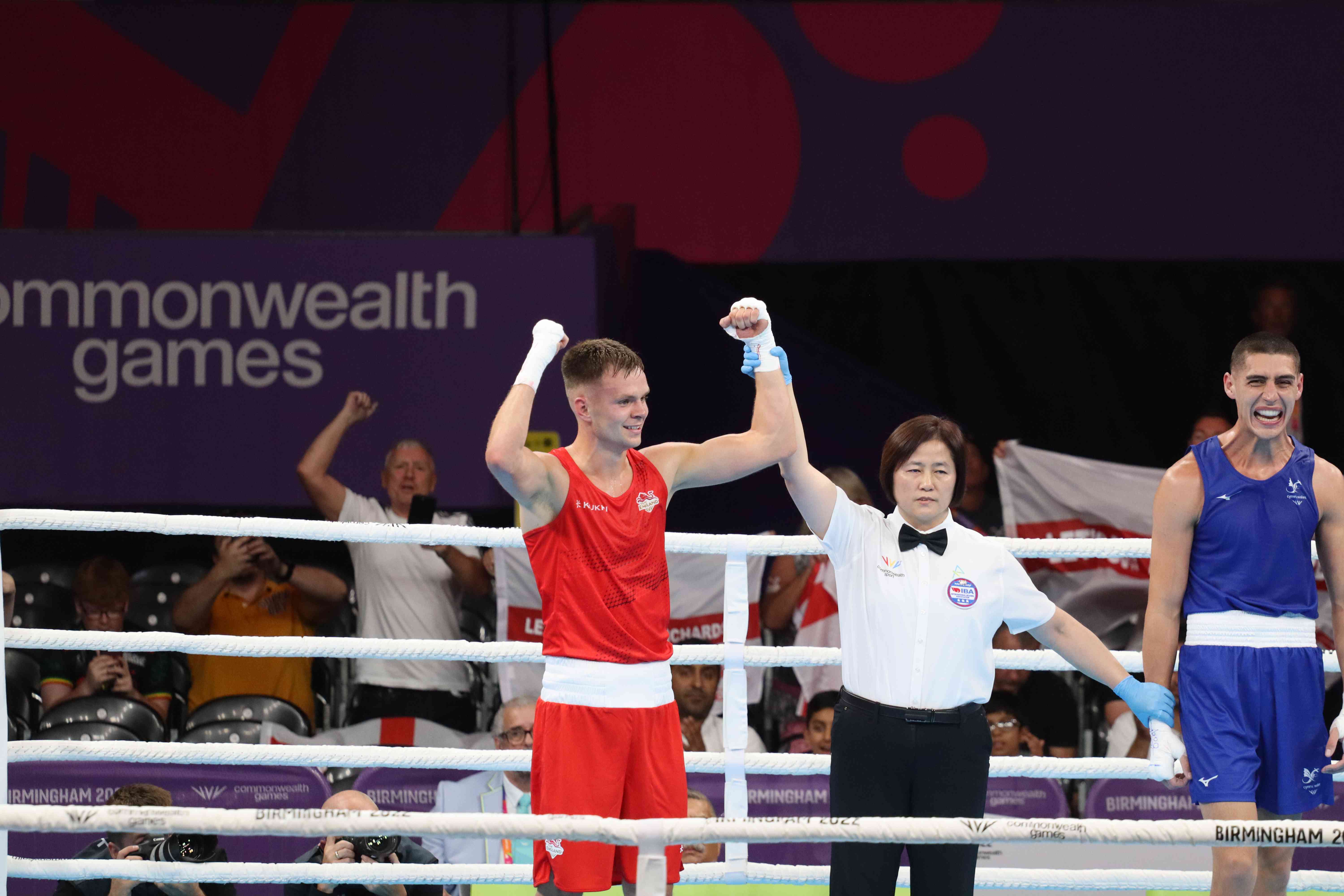 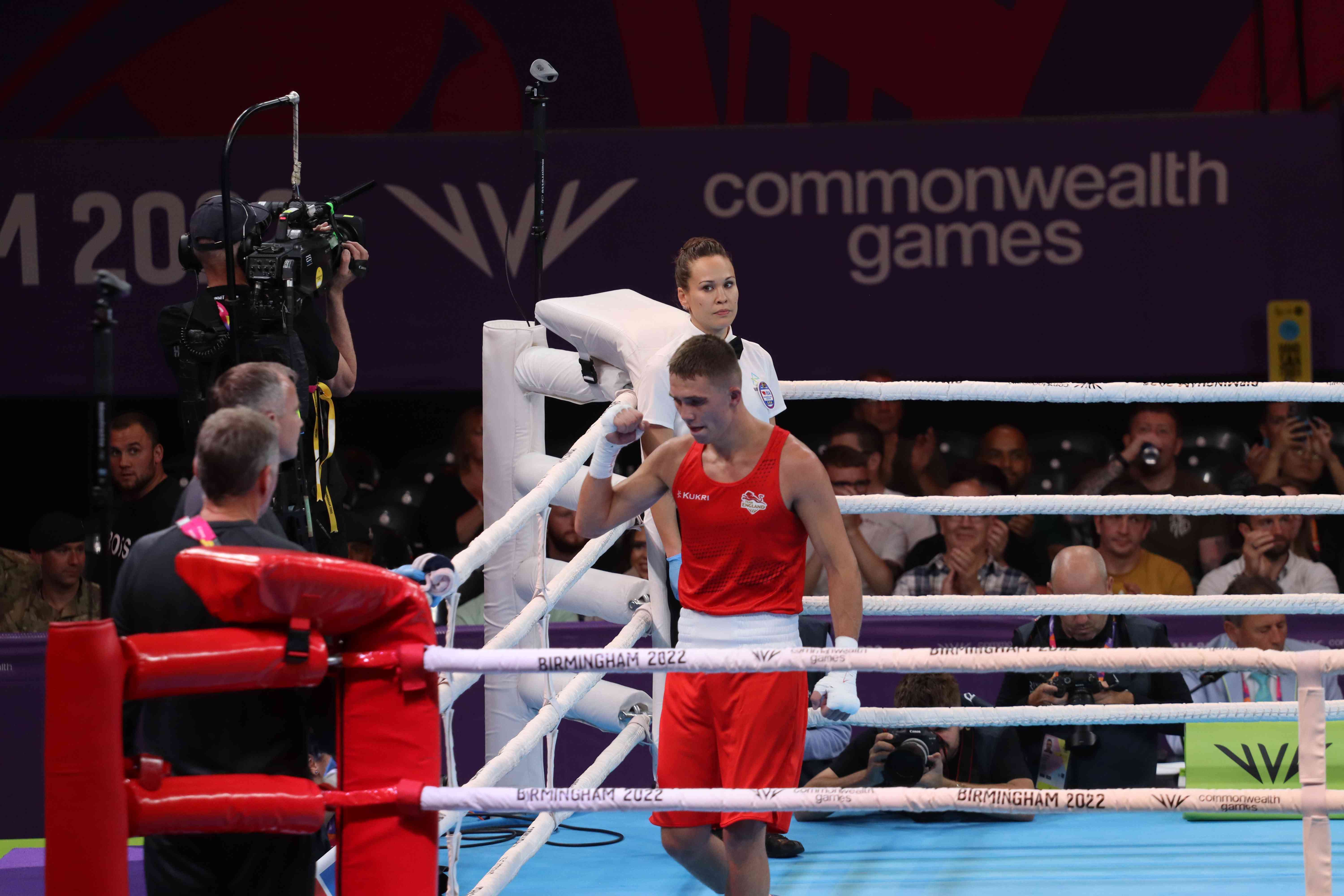 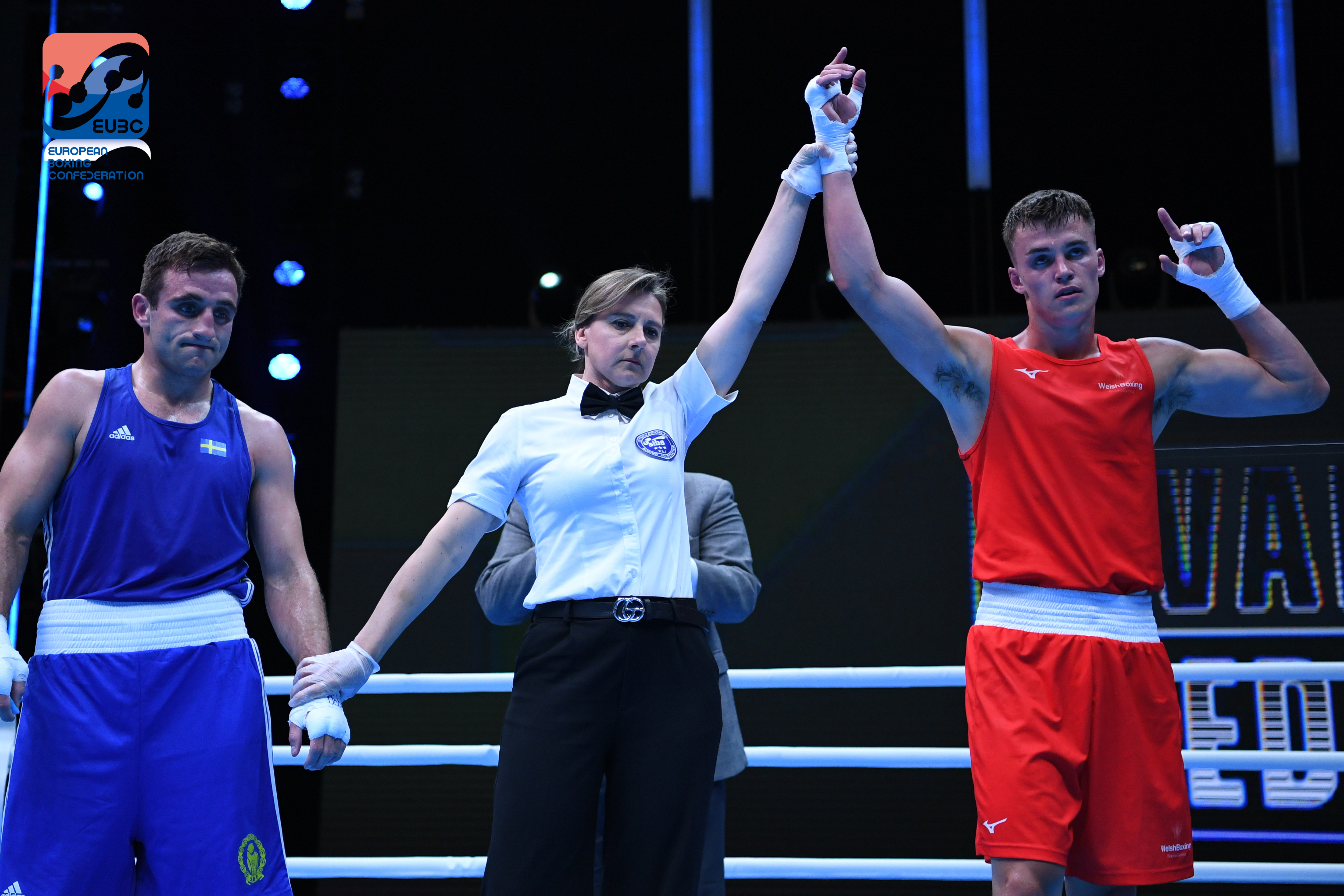