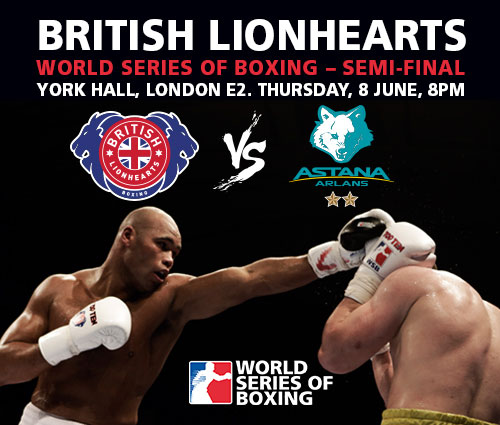 The British Lionhearts’ have named the 5 boxers that will take-on Astana Arlans Kazakhstan in the home leg of their forthcoming semi-final in the World Series of Boxing (WSB).

The team for the home leg at London’s York Hall on Thursday 8 June 2017 will feature Birmingham flyweight, Niall Farrell and Liverpool light-heavyweight, Tom Whittaker-Hart.  The pair are part of the GB Boxing squad and will be making their debuts in WSB.

They will be joined by a trio of overseas selections.  New Zealanders, Chad Milnes and Patrick Mailata, will box at lightweight and super-heavyweight respectively.  India’s Manoj Kumar will complete the team at welterweight.

If the match goes to a tie-break, like the Lionhearts’ quarter-final against the France Fighting Roosters, the deciding bout will be at flyweight and Liverpool’s Blane Hyland will box for the British team.

Tickets for the home leg at York Hall cost £20 and can be purchased at www.theticketfactory.com.