The GB Boxing Championships 2016 will take place at the English Institute of Sport in Sheffield on Thursday 8 December 2016 (doors open at 6.30pm, boxing begins at 7pm).

Tickets are now on sale at an early bird discount until 27 November 2016 and can be purchased at www.ticketsdirect.org.uk/gbchamps

Anyone that purchases a ticket at the discounted rate will be entered into a free prize draw to win a boxing glove signed by Team GB’s Olympians from the 2016 Olympic Games.

A full line-up of boxers competing on the night will be announced at the end of the week. 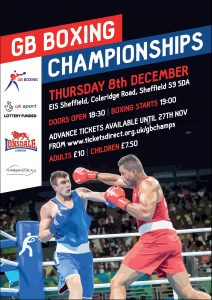