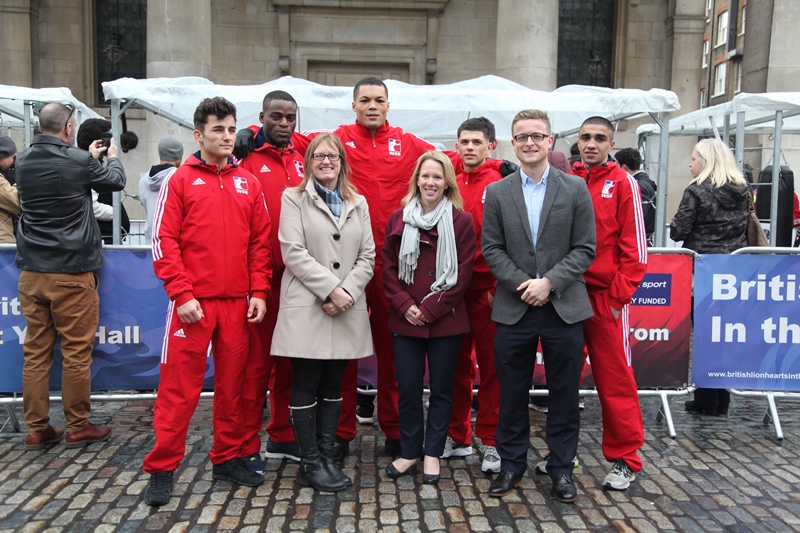 Five members of the GB Boxing squad have launched a new programme to increase participation in boxing in London.rnrn

It will be delivered in six London boroughs over 12 months and aims to:
•    Engage with more than 2,600 men, women and children
•    Create 12 new community boxing hub sites
•    Deliver training and opportunities to enable people to get involved in the sport as a coach, official or volunteer.

The programme is funded by Sport England and the Mayor of London and will be delivered by a network of boxing clubs and community groups overseen by the national governing body for the sport, England Boxing.

The British Lionhearts franchise is a partnership between GB Boxing, which manages the Olympic boxing programme, and the International Boxing Association (AIBA) which operates WSB.  The franchise is supported by funding from UK Sport’s major events budget.

British Lionhearts in the Community was welcomed by the Mayor of London, Boris Johnson, and the 2014 Commonwealth Games gold medallist, Joe Joyce, who boxes for the British Lionhearts and is from South London.

The Mayor of London, Boris Johnson MP, said: “It is less than four years since that incredible summer when Nicola Adams and Anthony Joshua warmed the hearts of the nation by winning Gold at the London Olympics. We have been working hard to build on their incredible success and I am delighted to back this scheme, which is taking the sport out to Londoners with the aim of boosting participation levels across the capital.”

Joe Joyce added: “Boxing brings huge benefits to people and communities and it is great to see that the presence of the British Lionhearts has contributed to the development of this programme which has the potential to do so much good for people across London by getting them involved in the sport.  It is a great thing for me and the rest of the squad to be part of.”

The programme will be delivered through a series of 24 community engagement days spread across Tower Hamlets, Camden, Westminster, Harrow, Enfield and Kensington & Chelsea.

Each community engagement day will take place in a busy public space and feature a mobile boxing ring managed by trained England Boxing coaches.  Members of the public will be given the opportunity to try boxing training, learn basic skills and sample aspects of the sport such as hitting a punchbag or working the pads with a coach.  Individuals that show an interest in learning more about the sport will be directed to their local boxing club.

There will also be opportunities for people to learn about coaching and volunteering opportunities in boxing in their local area.

The first phase aims to engage with more than 2,600 people across the six boroughs and establish contact with individuals that are interested in taking-up boxing or becoming more involved with the sport.

In phase two, the programme will deliver a series of Boxing Leaders and BOX Coaching courses to those that have expressed an interest in coaching or volunteering.

By the end of one year, the programme aims to establish 12 new Boxing Hub sites in gyms, schools, colleges, sports centres or community spaces across the six boroughs.

Phil Smith, Director of Sport, Sport England, said: ‘Boxing as a sport is growing in popularity, and this programme offers a great opportunity to help get even more people involved with their local clubs. Boxing is a great way to keep fit and meet lots of new people. We would encourage as many people as possible to go down to these community events and give it a go.’

Peter Fitzboydon, Chief Executive of London Sport, added: “We are delighted to be supporting British Lionhearts in the Community and look forward to helping the programme develop a bigger and better workforce in community boxing across London. Boxing has seen impressive growth in participation across London in recent years, and it is imperative the sport’s wider opportunities, including coaching and volunteering, are also supported in the coming years. I am convinced this project will have a substantive impact for London and Londoners and welcome the opportunity to deploy our London expertise in helping this programme to achieve its ambitious aims.”

WSB provides a qualification route to Rio 2016 whereby a boxer that competes can be eligible for selection by GB Boxing to compete at the WSB Olympic qualifying event in Sofia in May.  The Lionhearts currently sit top of Group B with three wins from three fixtures this season with the next home match at York Hall, against the USA Knockouts on the 3 March.

The President of the AIBA, Ching-Kuo Wu, declared: “AIBA strongly supports the initiative here today in Covent Garden as it epitomizes the true value of our sport. England Boxing has done a fantastic job in promoting our sport at grassroots level which is essential to ensure the long term vitality of our sport. This Community program is fully aligned with our HeadsUp initiative which aims to show the social impact of boxing and I give my full encouragement to England Boxing and its partners to continue to engage with the boxing fans in a country which is well known for its passion for our sport.”

England Boxing has appointed its Community Support Officer for London, Richard Powers, to project manage British Lionhearts in the Community.

He will co-ordinate a range of partners that will deliver the community engagement days and Boxing Leaders and BOX coaching courses.  These include: Sports Development teams and boxing clubs in each of the six boroughs, London Sport, Get Set Go Sport, Ealing, Hammersmith and West London College (EHWLC), Barnet and Southgate College, Westminster University, Greenwich Leisure Limited, Urban Trench Warfare and Fight4Change.

More details on British Lionhearts in the Community are available at britishlionheartsinthecommunity.com and on twitter at @BLionhearts.

Further information on the British Lionhearts boxing team and the World Series of Boxing is available at @Brit_Lionhearts and worldseriesboxing.com.